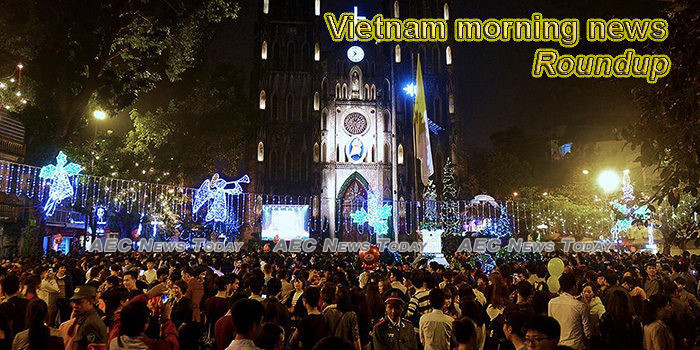 Vietnam targets 4 billion USD from cashew exports in 2020
According to the Vietnam Cashew Association (Vinacas), the sector will focus on deep processing, improving quality and diversifying products towards realizing the goal.
— VietnamPlus

Three solutions for Vietnam firms to boost integration in global supply chains
In the 2011 – 2019 period, Vietnam’s exports grew at an average of 15% annually, and are on track to contribute to an all-time high turnover of US$500 billion in mid-December.
— The Hanoitimes

New move breaks ice for Hanoi’s first metro line
According to the Vietnam Register, the temporary registration certificate for 13 trains aims to support the trial operation of the Cat Linh – Ha Dong railway system.
— The Hanoitimes

Vietnam’s Masan Group to offer up to $431m of bonds in 2020
Masan Group plans to issue up to 10 trillion dong ($431.5 million) of bonds next year to expand its business, lend to units and repay a loan.
— DealStreetAsia

Việt Nam to promote shrimp exports to EU next year
The EU is a potential market for Việt Nam’s shrimp industry next year because it is the largest shrimp market in the world, while the shrimp production of this bloc has not met its demand, according to domestic seafood experts.
— Viet Nam News

Hydropower dams run out of water on lack of rain
A heatwave and scanty rainfall have resulted in low water levels in hydropower dams in the central region, forcing several to shut down.
— VnExpress

Twitter, Facebook removed fake users, targeted people in Vietnam and other countries
Twitter has identified and removed nearly 6,000 accounts that it said were part of a coordinated effort by Saudi government agencies and individuals to advance the country’s geopolitical interests.
— Vietnam Insider

FDI firms face difficulties in listing
There are currently only 10 FDI enterprises listed on local exchanges compared to the tens of thousands of FDI firms operating in Việt Nam.
— Viet Nam News

Power supply to be ensured next year
Power supply for production and domestic consumption in 2020 would be ensured, according to the Ministry of Industry and Trade (MoIT).
— VietnamPlus

Amazon kicks off cross-border e-commerce in Vietnam
Amazon Global Selling (AGS) just connected and engaged with Vietnamese sellers through its first “Cross-border E-commerce Summit” in Vietnam to help provide knowledge and grow sellers’ networks and experience base to stay ahead in cross-border business development.
— Vietnam Insider

PM orders government agencies to review debt repayment delays
The Prime Minister has asked all state agencies who’ve delayed foreign debt repayment despite “having the money” to reflect on the damage caused.
— VnExpress

Viet reclamation project near reserve raises concern
A sprawling development on reclaimed land off Vietnam’s southern coast is expected to create jobs and raise millions in tax revenue for the state, but experts warn that environmental factors could sink the project and cause irreparable harm in the long term.
— The Straits times

RoK group sets up US$860 million investment fund for Vietnam
The National Pension Service of Korea recently launched a US$860 million corporate partnership fund with SK Group of the Republic of Korea that will allow the latter to increase investment in Vietnamese firms Masan Group and Vingroup, according to the Korean Investors news outlet.
— NDO

6 of the most picturesque destinations in Vietnam
Vietnam, while still considered an off-the-beaten-path destination, has seen a surge in popularity in recent years in terms of being a desirable destination.
— Daily Hive

Long history brand is no longer an important factor
Around the time he first started, the company employed as many as 700 people. Today that number is around a dozen, and Ngọc is not one of the lucky ones.
— Viet Nam News

Xmas spirit in Vietnam amazes foreign visitors
Tourists and expatriates in Vietnam’s bigger cities are pleasantly surprised by the scale and enthusiasm of Christmas celebrations in the country.
— VnExpress

Anti cigarette smuggling: an endless battle
Cigarette smuggling is rising in the year-end period and it is not easy for the state agents to fight it in southwester provinces and cities such as Long An and HCM City.
— Viet Nam News

Less bad news a plus point for VN shares
With less bad news expected in the short term and market sentiment stabilised, Vietnamese shares are widely expected to climb next week but growth will be moderate.
— Viet Nam News

Aquatic resources should be protected: experts
Việt Nam has potential of aquatic resources for the development of exploitation, farming and livelihoods for people.
— Viet Nam News