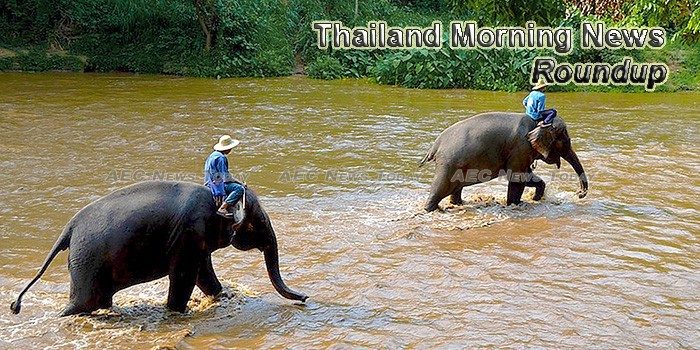 Migrant worker checks hit new snag
Hundreds of thousands of migrant workers who have been temporarily allowed to work in the country are at risk of becoming illegal as labour authorities struggle to meet a deadline in three weeks to register more than 1.6 million workers.
— Bangkok Post

Service Performance Index up 9.2% in Jan
Trade in Services Performance and Potential Index (TSPPI) rose 9.2% in January for the 13th consecutive month.
— NNT

55 political parties registered after 6 days
The Thai Sanduchon Party is the latest political party to submit registration documents to the Election Commission (EC), bringing the tally to 55 after day six of the registration.
— NNT

Bt1-tn budget for alternative energy
ENERGY FIRMS plan to expand their investments by more than Bt1 trillion in alternative energy and in adopting a new business model from 2018 to 2022 to ensure |long-term business growth is sustained.
— The Nation

‘New kind’ of corruption feared
THE RECENT corruption scandal involving state-run protection centres for the destitute has revealed a worrying form of graft that is much harder to investigate, an anti-corruption watchdog has said.
— The Nation

Navigation in Mekong River warned as water level recedes
The Marine Office in Chiang Rai province has warned operators of cargo and cruise boats between Chiang Rai and South China in the Mekong River to be extra cautious as the the water level has receded considerably in recent days, stranding several cargo boats in the river.
— Thai PBS

Windfall tax likely to deflate property bubble
The land windfall tax is expected to help fend off a property market bubble as developers take care to avoid tax liabilities that will come into effect if the value of unsold residential units exceeds 50 million baht.
— Bangkok Post

SUPERNAP DATA CENTRE POISED FOR EEC GROWTH
The market opportunities for data centre services in Thailand and the Asean bloc are immense, according to Sunita Bottse, managing director of the advanced data centre operator Supernap Thailand.
— The Nation

Pro-election group wants NCPO to be disbanded
Pro-election activists rallied at the soccer field of Thammasat University late Saturday afternoon (March 10) to demand the dissolution of the National Council for Peace and Order and the transformation of the government of Prime Minister Prayut Chan-o-cha into an interim government tasked with holding a national election this November.
— Thai PBS

Face masks to be distributed to cities affected by air pollution
Thailand’s Ministry of Public Health has convened a meeting to discuss the ongoing air pollution in nine provinces and is preparing to hand out 290,000 pollution resistant masks to people in all affected areas.
— NNT

CAT eyes bigger slice of digital services business
CAT Telecom has announced that it is focusing on digital services, with revenue from this area expected to be around Bt1.4 billion by the end of this year.
— The Nation

NBTC: No spectrum auctions until late 2018
Total Access Communication (DTAC) has been dealt a fresh blow, with the planned auctions of its expiring mobile spectra pushed back indefinitely until the new board of the National Broadcasting and Telecommunications Commission (NBTC) takes the helm later this year.
— Bangkok Post

Purchase of energy from solar rooftops expected to be deregulated in April
The Department of Alternative Energy Development and Efficiency is expected to propose to the National Energy Policy Committee headed by Prime Minister Prayut Chan-o-cha next month a project to buy power generated from solar rooftops of households and commercial buildings.
— Thai PBS

CGH to inject B1bn for revamp
CGH, formerly known as Central General Hospital Group, plans to spend at least 1 billion baht over the next three years to expand and invest in medical facilities.
— Bangkok Post

Trump’s trade war antics start worrying Thailand
Moves of the US administration to impose new tariffs and duties on a variety of imported products leaves Thailand worrying about its potential to continue profitable business with one of its most important trade partners.
–Investvine

Fire at Pattaya nightspot rips through bars as tourists flee: Reports
At least two tourists were sent to hospital as several people fled for their lives after a fire spread through Pattaya’s Walking Street on Saturday (Mar 9), media reports said.
— Channel NewsAsia