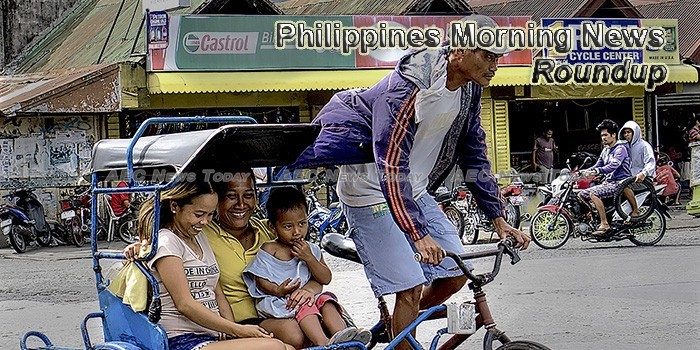 PH drew $774-million worth of foreign funds as of mid-March
Foreign portfolio investments or “hot money” posted a net inflow of $774.18 million as of mid-March, a reversal of the net outflow of $252.34 million a year ago, data from the Bangko Sentral ng Pilipinas show.
— Manila Standard

Grab to absorb Uber’s 500 employees in PHL
RIDE-SHARING tech behemoth Grab may absorb the more than 500 Uber employees in the Philippines and the rest of Southeast Asia, after acquiring the latter on Monday.
— Business Mirror

Economist sees nearly 6% inflation in May-June
Inflation likely spiked to between 4.9 percent and five percent this month, reflecting the continuing market adjustment to the first package of the tax reform program and a confluence of other factors such as power rate hikes and fluctuating oil pump prices, an economist said yesterday.
— Philippine Star

PH stock market investors stay cautious
Philippine shares closed in the positive territory as trade tensions between China and the US begin to ease.
— ABS-CBN (video)

Only 7.5% of Boracay resort area for gaming use — LRWC
Boracay Philippines Resort and Leisure Corp., the proposed resort project of Macau’s Galaxy Entertainment Group and Leisure and Resorts World Corp. (LRWC), will be a top leisure destination in the tourist island, targeting Asian families.
— Philippine Star

Philippines’ privacy watchdog summons Grab after deal with Uber
The National Privacy Commission (NPC) called for a meeting with Grab Philippines next week to discuss how its merger with Uber would affect Filipino drivers’ and users’ data.
— Rappler

Gov’t to borrow P325B locally in second quarter
THE GOVERNMENT is set to borrow P325 billion from the domestic market next quarter through auctions of securities, the Bureau of the Treasury (BTr) announced on Tuesday.
— BusinessWorld Online

2.4-M households are still without electricity – senator
Close to 2.4 million households, the bulk of them in Mindanao, still have no electricity, according to reports.
— The Manila Times

Southeast Asia Closes Island Beaches to Recover from Tourism
More popular Southeast Asian islands will be off-limits to visitors this year as officials seek to protect eco-systems crumbling from warming seas and unchecked sprawl, despite the risk to tourism revenues and tens of thousands of jobs.
— Tempo.co

Philippines Says Has No Proof Yet on Rights Groups’ Links to Drug Lords
Philippine law enforcement agencies still have no proof yet on allegations made by two government officials that human rights groups may have become the “unwitting tools” of drug lords, police and drug enforcement agency officials said on Tuesday (27/03).
— Jakarta Globe

New coins to stop ‘nickel extraction’
The decision of the Bangko Sentral ng Pilipinas to introduce a new series of coins was meant to deter foreign entities from stealing large quantities of the local specie to extract their nickel content.
— Philippine Daily Inquirer

MICC commences review of 26 mine sites
The interagency Mining Industry Coordinating Council (MICC) has kicked off its “fact-finding and science-based” review of an initial batch of mine sites ordered either suspended or shutdown by the Department of Environment and Natural Resources (DENR) last year.
— Manila Bulletin

PayPal bullish on PH as freelance work grows
Freelancing is on the rise in the Philippines and those making a living from contract-based work are optimistic about job opportunities, global electronics payments giant Paypal said on Tuesday.
— The Manila Times

Peso drops ahead of two-day break
THE PESO weakened against the dollar on Tuesday ahead of expected market inflows today ahead of a two-day trading break.
— BusinessWorld Online

Govt OKs P354M for coffee industry
The government has alloted P354.6 million to help the Philippine coffee industry increase its production to 214,626 metric tons (MT) by 2022.
— The Manila Times

Taipei gives P600K more to kin of OFW killed in Taiwan quake
Taiwan on Tuesday donated an additional PHP600,000 to the family of Melody Albano Castro, the Filipina caregiver who died during the deadly earthquake that hit Hualien, Taiwan in February.
— Northbound Philippines

Duterte offers free housing, aid to ASG bandits who surrendered
While taking a hard line on communist rebels, whom he wants legally declared terrorists and wiped out, President Duterte is welcoming with a soft heart internationally recognized and condemned terrorists who have surrendered to the authorities.
— Philippine Daily Inquirer

Japan to provide PH with 22 more emergency vehicles
The Japanese government will provide an additional 22 emergency vehicles to the Philippines on top of the 54 units it turned over to Visayas and Mindanao under its Grant Assistance for Grassroots Human Security Projects (GGP) in the country.
— Philippine News Agency