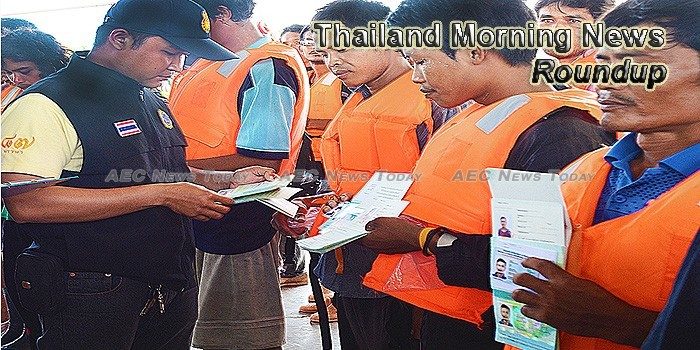 Thailand protests China over registration of “Monthong” as trademark
The Department of Intellectual Property (DIP) has officially protested China over a Chinese business operator’s request to register trademarks in English and Chinese meaning “Monthong”, the popular durian species in Thailand.
— Thai PBS

60,000 workers become illegal
Nearly 60,000 migrant workers have had their status rendered as illegal and are no longer allowed to stay in the country after they missed Saturday’s deadline for registration under the new labour law.
— Bangkok Post

Thailand wields the tax axe over crypto investors
Thailand is planning to tax investors in digital currencies such as Bitcoin at a heavy rate in one of its latest attempts to regulate the market and tap into profits made by crypto investors.
— Investvine

New book on legal philosophy offers lessons for Thai ethics
WHILE THE junta demands that citizens respect, obey and comply with the country’s laws, many people in the world see Thai law as abused and misused.
— The Nation

Thai legislature voices support for IPU to protect refugees’ rights
Members of Thai Parliament have assured the 138 Assembly of the Inter-Parliamentary Union (IPU) in Geneva of the Thai legislature’s adherence to pledges and treaties to facilitate safe, orderly, and regular migration.
— NNT

Thai airlines flying high
WITH CONTINUING high competition in the airline business, all Thai firms are adding or expanding routes both domestic and oversees to meet the strong demand growth.
— The Nation

Abhisit shuns Prayut supporters
Democrat Party leader Abhisit Vejjajiva has shut the party’s door on former MPs thinking of remaining with the party but who wish to support Prime Minister Prayut Chan-o-cha to return as an outsider premier after the next general election.
— Bangkok Post

Myanmar seeks closer Thai business ties
THOUGH MYANMAR received only US$123 million (Bt3.84 billion) from Thai investments in the previous fiscal year ending on March 31, the nation’s investment body foresees a significant inflow of Thai businesses over the next few years.
— The Nation

Golf courses, zoos, airports in for tax breaks, ministry says
Golf courses, zoos and airports are among business operators which could enjoy tax alleviation measures under a proposed land and buildings tax bill planned for next year, the Finance Ministry says.
— Bangkok Post

PM Prayut satisfied with outcomes of GMS Summit
The Prime Minister has expressed his satisfaction with the outcomes of the latest GMS Summit, held in Vietnam.
— NNT

Prawit says election timeline unaltered by hiccup in promulgation of MPs bill
Deputy Prime Minister Gen Prawit Wongsuwan is confident the election roadmap won’t change because of the decision of 27 members of the National Legislative Assembly (NLA) to seek a court interpretation of the controversial bill governing the election of Members of Parliament.
— NNT

TPG said to eye stake in $500m Thai fertility hospital
TPG is in talks to buy a stake in a Thai hospital specializing in fertility treatments, according to people with knowledge of the matter.
–DealStreetAsia

BMA poised to lower HIV infection by 90% in 2020
Health officials in Bangkok have met to discuss the situation in regard to HIV/AIDS in the capital city.
— NNT

Technology transforms coverage
Digital transformation is shaping the way insurance companies do business and changing consumer behaviour in buying insurance products, enabling insurers to compile information about driving habits to calculate risks and offer usage-based policies, which helps some car owners pay lower premiums if they can prove to be safe drivers or they drive less.
— Bangkok Post

PM thanks all for successful migrant workers registration
The Prime Minister, Gen. Prayut Chan-o-cha, has thanked employers and migrant workers who have complied with the registration process, expressing the government’s care towards workers as the new minimum wages take in effect from today (April 1st).
— NNT

NLA monitoring rabies situation
The National Legislative Assembly (NLA) is keeping a close watch on the spread of rabies virus in Thailand while confirming that the lawmakers disagree with the idea of a pet tax proposed by Public Health Ministry Permanent Secretary Jedsada Chokdamrongsuk.
— NNT

Retail’s future lies in Big Data about customers
THE EXPANSION of distribution channels to physically cater to shoppers in front of their homes, along with enhancing Big Data analysis to capture purchasing behaviour of individual shoppers, have recently emerged as two major new strategies by major retailers.
— The Nation

Junta files complaint to police against 57 core leaders and members of pro-election group
A complaint has been lodged with Chanasongkram police by the National Council for Peace and Order against 57 core leaders and followers of the pro-election political group, accusing them of inciting rebellion among the people to defy the law, illegal political assembly and violation of the NCPO order regarding the maintenance of peace and order.
— Thai PBS

4th army region to sue a Phuket hotel’s management of defamation
The Fourth Army Region has threatened to sue the management of a hotel on Phuket’s Patong beach and a person who posted a video clip in the social media purportedly implying that a group of army officers went to the hotel to extort money from the management.
— Thai PBS

Nok Air to cut and reschedule flights to solve flight delay
Nok Air airliner has decided to reduce the number of its flights to avoid the problem of flight delay and, at the same time, has put on standby two planes to be brought in from U-tapao airport in case there is a problem of plane malfunctioning, said Nok Air CEO Piya Yodmanee.
— Thai PBS

A southern train was shot by suspected militant but no one was hurt
Gunman opened fire at a train in Narathiwat’s Cho Airong district Saturday evening (March 31), but no passengers were hurt.
— Thai PBS

Australia’s leading 24/7 gym to launch in Asia
One of Australia’s most successful gym chains, Jetts, has launched into Asia this month, with the opening of four brand new clubs in Bangkok, creating an unrivalled chain of fitness clubs throughout Thailand.
— AEC News Today/ PR Newswire (media release)