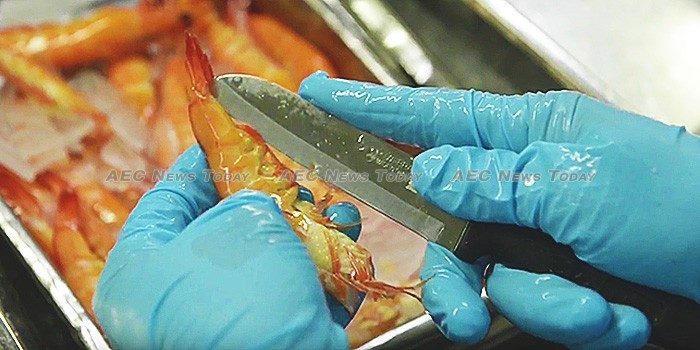 A team of EU officials is scheduled to visit Thailand next month to inspect the country’s efforts to reign in its seafood and fishing industries to conform with EU fishing regulations. To say that Thai officials are more than a little confident that it will be the last such visit under threat of penalty is somewhat of an understatement.

If all goes as Thai officials are hoping the inspectors will report back to the European Union Commission for Maritime Affairs and Fisheries (EU-MARE) that Thailand now complies with regulations aimed at preventing illegal, unreported, and unregulated (IUU) fishing and the ‘yellow card’ warning issued in April 2015 threatening to block Thailand seafood exports to the EU will be lifted.

Such a conclusion will signal the end to one of the hardest battles the military-backed government of Prime Minister General Prayut Chan-o-cha has had to confront since staging its ‘military intervention’ on May 22, 2014. At the same time a parallel battle against human rights and labour abuses in the Thailand seafood and fishing industry is also bringing concrete results, the government says.

The high level of Thailand’s confidence in its preparedness for the upcoming inspection was evident at a recent ‘meet the press’ event in Bangkok, and has been evident in government statements ever since.

When questioned on the timing of the upcoming inspection, Thailand government spokesperson Lieutenant General Sansern Kaewkamnerd said in a confident and almost defiant tone that the inspectors “can come whenever they want. We are ready to show that the improvements they requested have been done.

Also expressing confidence that Thailand’s days of living in threat of having its seafood exports to the EU banned was deputy government spokesperson Lieutenant General Werachon Sukondhapatipak, who equally confidently said: “Thailand is not concerned by the upcoming inspection. Thailand knows what its international obligations are and since 2014 we have tackled the issues in a Thai way and will continue doing so”.

In the days since the Bangkok media briefing a steady stream of announcement from the Thailand government has reflected the same high level of confidence,

According to Ministry of Foreign Affairs (MoFA) spokesperson Bussadee Santipitak, Thailand “has built upon the reforms of all dimensions undertaken during nearly the past three years” with proactive enforcement backed by legislative and regulatory measures bringing Thailand to the point where it should be declared IUU-free.

Accounting for some 4 per cent of all Thai exports and employing more than 300,000 people, Thailand’s seafood and fishing industries generated more than US$7 billion for the country in 2016, with some $1.657 million from sales to the US and more than $842 million in exports to the EU.

On export volumes Thailand is the third largest seafood exporter in the world, and home to one of the worlds largest canned and frozen seafood producers, the Thai Union Group (TUG).

Thailand’s move from a non-IUU fishing compliant State to one with a warning to fix its seafood industry up or lose access to the EU market in just six months has not been an easy one, the very nature of the warning designed to spur immediate action after years of discussions with previous administrations had seen no improvement.

Thailand’s response was exactly as the waning was intended. Instant. Drawing on the virtually unlimited powers available under the “omnipotence clause” (article 44) of the 2014 Interim Thailand Constitution, Prime Minister Chan-o-cha rallied the combined forces of nine different state agencies and their subordinate departments to fix the problems.

Within days the first of what now totals 28 port-in, port-out (PiPO) centres was established in 22 Thailand provinces to record the entry and departure of fishing boats from 297 wharves, while an aggressive campaign was launched to register  and record the details of some 30,000 unregistered fishing boats.

Additionally, vessels over 60 gross tons were ordered to fit Vessel Monitoring System’s (VMSs), while inspections of fishing vessels at ports and at sea was ramped up to an unprecedented level.

To aid with enforcement a mobile app was developed which allows those enforcing the legislation to immediately verify details of boats and crew, while some areas have been declared closed to commercial fishing for parts of each year in an attempt to improve sustainability.

The speed and commitment with which anti-IUU activities was introduced caught the Thai fishing sector by surprise, with one act of defiance seeing thousands of vessels refusing to put see in protest, creating an artificial fish shortage at wet markets and fish processing factories for a short period of time.

As recently as last September fishermen across the country have staged protests at the enforced compliance to the EUs IUU fishing regulations, claiming compliance had cost the fishing sector some Bt500 billion (about US$15.9 billion), while the fishing fleet had been decimated from some 40,000 vessels when the compliance push began to just 10,600 today.

Over the past three years some 1,000 ‘unregistrable’ boats have been decommissioned under a government buy-back scheme, while soft loans have been provided to enable fishing boat owners to replace illegal fishing equipment with that which complies with EU regulations.

It hasn’t all been one sided. While the government’s drive has met with considerable blowback from fishermen and those on the fringes of the fish processing side of the industry, major seafood and fish processing companies such as TUG and the Charoen Pokphand Group (CPG) have also implemented measures to ensure their supply chains are IUU fishing free.

At one point TUG took on an additional 1,000 people at an initial cost of $5 million after problems in the now eliminated ‘pre-processing’ industry were highlighted.

On their last visit EU inspectors highlighted six areas needing further addressing. A recent meeting of the committee tasked with having the ‘yellow card’ removed heard that 80 per cent of those items had been addressed, with the remainder in the process of being managed.

After such a long and drawn-out battle, Thailand’s days as an IUU fishing reprobate appear to be rapidly coming to an end, while neighbouring Vietnam, who received a ‘yellow card” last October, is just beginning its journey down the same path.