Singapore Morning News For May 1 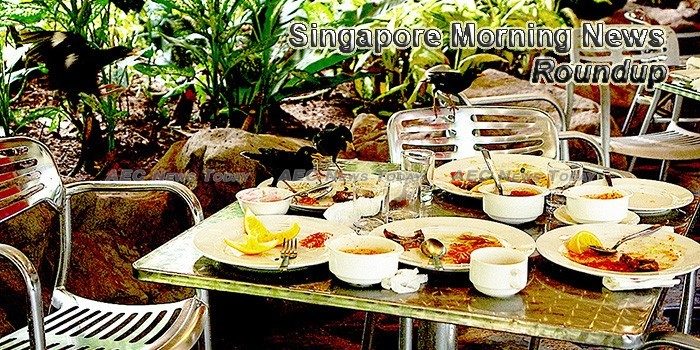 Trump looking at Korean DMZ, Singapore for summit with Kim Jong Un
President Donald Trump said Monday that Singapore and a facility inside the Demilitarized Zone that divides the Korean peninsula are under consideration as sites for his highly anticipated summit with North Korean leader Kim Jong Un.
— Politico

Singapore-led Asean favors China over US
Singapore’s anticipated chairmanship of the Association of Southeast Asian Nations (Asean) opened on the weekend with a summit that reaffirmed the city-state’s vision of a “rules-based” regional order but offered a limited view on pressing security matter.
— Asia Times

PM: Singapore on course for healthy growth this year
Singapore’s economy grew 3.6 per cent last year, and it can look forward to healthy economic growth this year, too, if this momentum is maintained, Prime Minister Lee Hsien Loong said yesterday.
— The Straits Times

NTU researchers develop technology to reduce noise pollution through open windows
The device detects incoming noise even before it reaches the window, computes its attributes, and emits a countering sound or “anti-noise”. The researchers are working with government agencies in Singapore to further improve the technology to make it viable for commercial and residential applications.
— Open Gov Asia

Singapore Warship’s Vietnam Visit Highlights Defense Ties
First such voyage in 2018 comes amid a busy week for the bilateral relationship.
— The Diplomat (paywall)

Singapore must forge its own strategy to become a global AI leader
CHINA now has the most valuable artificial intelligence startup in the world. SenseTime raised US$600 million from Alibaba and other investors at a valuation of more than US$3 billion in April, becoming the world’s most valuable AI startup.
— The Business Times

Always work together as ‘Team Singapore’, so workers are taken care of: PM Lee
Regardless of international developments, Prime Minister Lee Hsien Loong stressed the importance of always working together domestically as “Team Singapore” on Monday (Apr 30).
— Channel NewsAsia

India must focus on manufacturing turnaround at RCEP talks in Singapore
For much of the first week of May, countries engaged in the negotiations for formalizing the Regional Comprehensive Economic Partnership (RCEP) will meet in Singapore for their 22nd round of negotiations.
— Livemint

Commissioner of Charities finds millions from Sri Veeramakaliamman Temple funds were put at risk due to shady deals
The Ministry of Culture, Community and Youth (MCCY) disclosed today that an inquiry into one of Singapore’s oldest temples has revealed “severe mismanagement” in the administration of the charity.
— The Independent Singapore

DBS Q1 net profit jumps 26% to record S$1.52b
Singapore’s largest lender DBS’ first-quarter net profit rose 26 per cent from the same period a year ago to a record S$1.52 billion on the back of strong loan and non-interest income growth, as well as a higher net interest margin.
— Channel NewAsia (video)

India’s L&T to sell unit to Schneider-Temasek consortium for $2.1b
Larsen & Toubro Ltd., India’s largest engineering and construction company, has agreed to sell its electrical unit to a consortium led by Schneider Electric SE, people with knowledge of the matter said.
— DealStreetAsia

Labour Day in S’pore is when politicians publicly go to work
May 1 is Labour Day, a day many Singaporeans only know it has something to do with work, or the lack of.
— Mothership