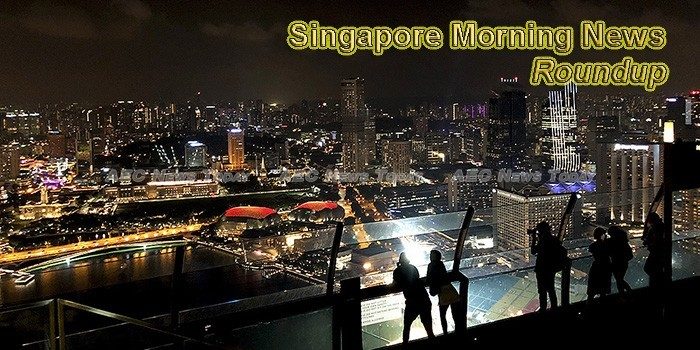 US Treasury Department targets Singapore for money laundering
Last month, the Asia Sentinel reported that the US Treasury Department has initiated a wide-ranging campaign against money laundering particularly targeting the governments in Cyprus, Beirut, Singapore and the Gulf states (‘US Mounts Major Global Anti-Money-Laundering Campaign’, 31 May).
— The Online Citizen

Singapore telcos expect partner ecosystem boom
Half of communications service providers in Singapore expect to improve revenue by at least 16% in just two years by leveraging partner ecosystems, according to a new study from BearingPoint.
— Telecomasia.net

AmCham S’pore urges US to join trans-Pacific trade pact
THE American Chamber of Commerce in Singapore (AmCham Singapore) has called on the United States to join the trade pact which has replaced the Trans-Pacific Partnership (TPP), from which the US withdrew in January 2017.
— The Business Times (paywall)

Singapore stocks tumble to 9-month low after new Trump tariff threat
Singapore’s stock market closed at a nine-month low on Tuesday (Jun 19) as investors around Asia went on a selling spree amid the escalating trade dispute between the United States and China.
— Channel NewsAsia

SMEs still upbeat about rest of the year, but trade tensions weigh on sentiment
SINGAPORE’S small and medium-sized enterprises (SMEs) remain upbeat about their prospects for the second half of this year, but caution has crept in as a result of the ongoing US-China trade tensions.
— The Business Times (paywall)

Singapore tech firm Sea raises S$780m in fresh funds to bolster e-commerce bet
Singapore technology company Sea on Tuesday (Jun 19) announced that it has raised US$575 million (S$780.2 million) in fresh funds from its convertible notes offering, which it will use to grow its e-commerce platform Shopee.
— Channel NewsAsia

Future of logistics in Singapore ‘cannot be more exciting’
ON April 30 this year, the National Trades Union Congress (NTUC) set up the Supply Chain Employees’ Union (SCEU) to support the development of skills and competencies of employees in Singapore’s logistics and supply chain sector.
— The Business Times (paywall)

Is Singapore really going completely cashless?
In a move towards a cashless nation, two more banks, OCBC Bank and UOB have joined the Nets to allow payment through a mobile wallet application.
— The Independent Singapore

Guan Eng: Let’s give Singapore some competition
Finance Minister Lim Guan Eng told a group of entrepreneurs that it is time that Malaysia gave some healthy economic competition to Singapore.
— The Online Citizen

Immigration investigators bust one of the biggest sham marriage syndicates; 17 involved
A barbecue at East Coast Park nearly four years ago was where two men hatched a plan that spawned a series of sham marriages between Singaporean men and Vietnamese women.
— The Straits Times

High Court grants Hyflux six-month reprieve from creditors | Video
Water treatment firm Hyflux’s application for an extended six-month moratorium was given the green light by the High Court on Tuesday (Jun 19), as the company said it is in preliminary talks with more than 20 interested parties for rescue financing of up to S$200 million. Channel NewsAsia’s Brandon Tanoto has the details.
— Channel NewsAsia (video)