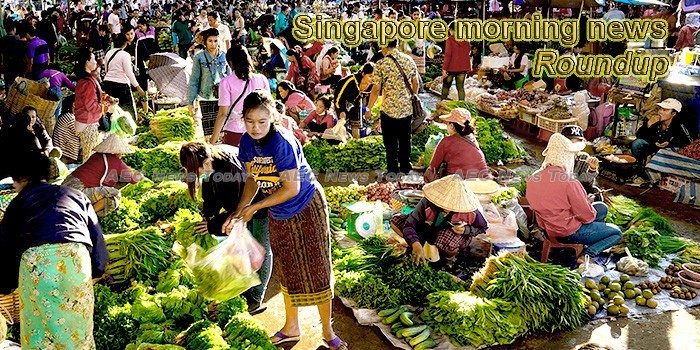 Asean’s ‘little red dot’ about to burst with home-grown AI applications (video)
Has an artificial intelligence (AI) ever given you advice about education, finances, or love? If yes, you might want to thank (or otherwise) the many researchers and developers in Singapore, a tiny red dot on most maps, set to become very large in the high-tech world of AI application development.
— AEC News Today (video)

The Guide to Employment Permits for Foreign Workers in Singapore
For expatriate workers and their employers in Singapore, understanding the process to obtain a valid employment permit is vital.
— AsianBriefing

Bidder ends deal on $10,000 bid for Chomp Chomp hawker stall
The tender bid was made last month by Ms Lim Ah Ber for $10,028 a month to rent a stall in popular food haunt Chomp Chomp Food Centre to sell drinks.
— The New Paper

China-backed trade pact talks at ‘critical stage’: Singapore PM
Talks on a China-backed free-trade pact have reached a “critical stage”, Singapore’s leader said Wednesday as he urged regional economic ministers to seal the deal by the end of the year.
— ABS-CBN News

Singapore, African firms seal deals, eye new markets at business forum
INLAND African nations are markets ripe for pre-fabricated infrastructure, according to a Singapore company that churns out such buildings.
— The Business Times

More home-grown talents to be used in tourism campaign
Eighty home-grown talents will feature in short films and promotional events overseas as part of the Singapore Tourism Board’s (STB) second wave of marketing activities under the Passion Made Possible brand.
— The New Paper

Top teachers honoured
As a 10-year-old child, Ms Angeline Chan saw a schoolmate having difficulties interacting with others.
— The New Paper

PM Lee just might’ve been right about the WiFi; Singapore’s data usage goes up 24 per cent
During his National Day Rally held on August 19, Prime Minister advised Singaporeans to cut down on their 4G usage when they are outside in efforts to better manage the rising cost of living.
— The Independent

Netizens aghast that Thai Citizen who lived outside of Singapore charged for defaulting on NS
On Tuesday (28 Aug), a 24 year-old Thai National was found guilty of defaulting on his national service obligations even though he had barely lived in Singapore.
— TOC

$1 billion may sound like a huge amount in GST vouchers but in reality, does it really help the average Singaporean?
The Straits Times has announced via an attractive headline that there will be $1billion worth of GST vouchers and Medisave top-ups which would benefit 1.6 million Singaporeans. While this all sounds good, is it misleading?
— TOC

New CPF rule indicates more Singaporeans may be in financial trouble
It was announced yesterday (28 Aug) that Central Provident Fund Board has changed its rules to allow HDB flat buyers the option to retain up to $20,000 in their CPF Ordinary Account when taking up HDB loans.
— TOC

Grab to invest US$250m in Indonesian startups in race against Go-Jek
The Singapore-based firm recently raised US$2 billion in fresh funding to expand in Indonesia, which it has earmarked as a priority market.
— Channel NewsAsia

Air pollution haze can put a dent in solar power
Ian Marius Peters, now an MIT research scientist, was working on solar energy research in Singapore in 2013 when he encountered an extraordinary cloud of pollution.
— TechExplore

List Sotheby’s International Realty expands in Asia-Pacific with new Thailand, Indonesia and Vietnam offices
List Sotheby’s International Realty is expanding its foothold in the Asia-Pacific region, with the opening of new offices in three Southeast Asian countries, and the expansion of its Singapore office which will serve as its Southeast Asia regional headquarters.
— BusinessMirror

Social enterprise launches new platform to ‘incentivise giving’, encourage altruism
With a few clicks of the mouse, individuals can now make a donation online, and by doing so, earn a chance at winning a brand new Mercedes-Benz CLA 180 coupe, or other cash prizes.
— TodayOnline