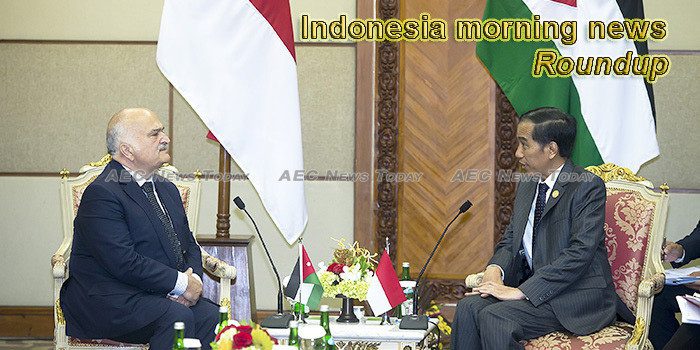 Ship capsizes in waters off Indonesia’s Bali, leaving seven missing
Indonesian rescuers said on November 25 that they are searching for seven sailors of a cargo ship that sank in waters off Bali resort island.
— Saigon Giai Phong

Indonesia to sign free trade deal with EFTA countries in December
Indonesia has wrapped up negotiations for a free trade and investment pact with members of the four-nation European Free Trade Association, and a final agreement is due to be signed in December, Indonesia’s trade minister said.
— ET Energyworld

Industrial Revolution to Cause the Loss of 375 Million Jobs
The fourth industrial revolution will cause the loss of 75 million to 375 million jobs with many companies collapsing as a result of automation.
— Tempo.co

News focus – Cultural heritage in Kisar part of Indonesian civilization By Otniel Tamindael
Still unknown by many, the small, rocky island of Kisar in Southwest Maluku District, Maluku Province, is in fact storing a lot of cultural heritage in the form of rock art across almost the entire island.
— Antara News

Istiqlal Mosque to have wastewater plant
The pollution and environmental damage control directorate general of the Environment and Forestry Ministry is currently building a wastewater treatment plant at the Istiqlal Mosque in Central Jakarta to help the operations of the grand mosque.
— The Jakarta Post

Govt Remains Focused on Reinforcing Industrialization
The government will remain focused on accelerating the country`s industrialization as it will bring multiplier effects to national economy.
— Tempo.co

Indonesia promotes products in Belarus
Indonesia has promoted national exported-products in Belarus through various programs, such as business forum, seminar, and exhibition in Minsk, Belarus on November 22-25, 2018, according to a statement from the Indonesian.
— Antara News

A new Bali on Indonesia’s eastern frontier? The remote Kei Islands see potential in tourism
It is believed by many on the Kei Islands that some of their earliest ancestors came from Bali, braving the long expanses of sea to the west.
— Channel News Asia

Bali Resort Bans Poolside Smartphone Use
But the Ayana Resort and Spa in Bali, Indonesia, is taking a different approach. Their new “In the Moment” program is encouraging visitors to unplug when they’re by the pool — by banning smartphones and other electronic devices.
— Indonesia Expat

Welcome winds of change in a greening Indonesia
Country keen to tap renewable energy as it powers up more homes, develops economy
— The Straits Times (paywall)

Rohingya Refugees Express Gratitude Towards Indonesia
The Rohingya ethnic community that has sought refuge in Indonesia has expressed their gratitude to the government for its swift action to protect them
— Tempo.co

Aceh Village Orders Coffee Shops to Cut Off Wi-Fi as it Distracts Kids from Quran
A village in the Indonesian province of Aceh — the only region in Indonesia with special autonomy to enact religious bylaws — is saving its children from the worldly distractions that are coffee and Wi-Fi.
— Indonesia Expat

I appreciate what Catholic schools have done for multiculturalism: Minister Muhadjir
Education and Culture Minister Muhadjir Effendy said in a statement sent by his assistant to The Jakarta Post on Sunday that he appreciated what Catholic educational institutions have done in spreading values of multiculturalism.
— The Jakarta Post

Get smart: Indonesia’s ramshackle warung stores go digital
Warung Tiga PutRI is not your typical warung . Although it sells snacks, cigarettes and assorted knick-knacks like countless other ramshackle convenience stores across Indonesia’s towns and cities, the tiny bright-yellow kiosk does much more for it is one of Indonesia’s growing number of smart warung .
— South China Morning Post

President Calls on People Not to Disseminate False News
President Joko Widodo (Jokowi) calls on the people not to disseminate slander and false news.
— Tempo.co