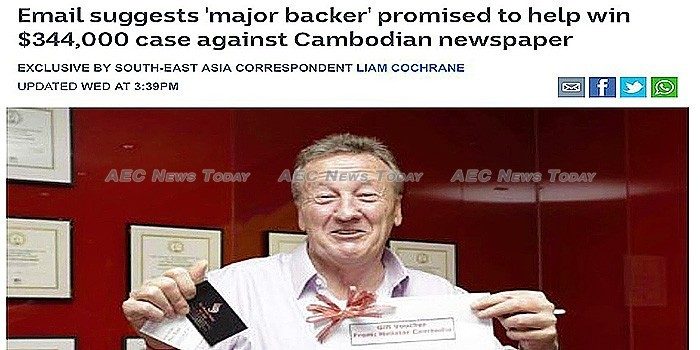 It is hardly surprising news that the new owners of Cambodia’s oldest newspaper The Phnom Penh Post is a PR company, nor that the deal is said to have been done early last week.

It was at that time that the company’s legal battle with former CEO Chris Dawe sunk to appalling depths of skulduggery, with Australia’s ABC News citing an allegedly ‘leaked email’ to throw into question the integrity of a Cambodian court judge and to vesicate the character and reputation of the victim, one of the regions pioneering news media publishers.

Not content with besmirching Mr Dawe, who reportedly told Mr Cochrane by email that ‘”the purported email is entirely false…”‘, Mr Cochrane then doubled-down by implying impropriety in the Cambodia judicial system, though he wasn’t sure whether it was a male or a female judge that was potentially, possibly, or maybe at fault.

Citing the ‘leaked email’ said to have been originally sent to The Phnom Penh Post‘s finance director, Heang Tangmeng asking for a US$10,000 loan, Mr Cochrane notes it refers to a male judge.

A few paragraphs later the article states ‘lawyers for The Phnom Penh Post asked the Phnom Penh Municipal Court judge to recuse herself from the case — and reportedly submitted Mr Dawe’s email as evidence — but she declined.’

While Mr Cochrane also claims the ‘leaked email’ contains details of Mr Dawe’s salary, legal strategy, and personal life, he fails to exhibit any part of the correspondence. Neither does he appear to have asked Post Media or the person who allegedly received the ‘leaked email’ to confirm their belief in its authenticity.

Why Mr Dawe would need or want to include details of his previous salary to someone who would be in a position to know such information, or his ‘legal strategy’ when trying to borrow money defies logic.

Several people familiar with Mr Dawe’s period at The Phnom Penh Post have said that his ‘salary’ comprised the payment of accommodation and expenses only, with wages being offset as equity in Post Media. With former Post Media chairman Bill Clough propping up the company with cash injections, they say Mr Dawe’s equity was being constantly diminished.

It has also been claimed that Mr Dawe was paying for contributed stories written by non-staff members himself due to no budget being allocated for external story purcahses.

These claims would appear to have some merit. The alleged letter from the Cambodia General Department of Taxation (GDT) exhibited in our story on March 21 makes specific mention of ‘unpaid fringe benefits tax (FBT) on benefits supplied to foreign staff and the personal expenses of an unnamed former CEO‘.

Mr Cochrane then goes on to reveal that Mr Dawe had told him that he was in Bangkok receiving treatment for cancer. Say what? The relevance of that is? Let’s not get too concerned about whether Mr Dawe has told anyone else he has cancer or not before we announce it to the world. Seriously?

AEC News Today first saw similar accusation to those contained in Mr Cochrane’s story in a statement by Post Media CEO Marcus Holmes on April 5, shortly after bailiffs had visited the company to enforce the lower court’s verdict. Mr Holmes was asked to substantiate the accusations in the statement, including providing the email relied on by Mr Cochrane.

He was also asked whether the company had ever filed civil charges or made a criminal complaint after firing Mr Dawe for alleged ‘gross misconduct’ in 2015, and asked to quantify the losses that he claimed Mr Dawe’s actions had cost Post Media.

AEC News Today also asked precisely what documents Post Media had filed with the Cambodia Supreme Court on March 30, and on what date Post Media had filed its appeal with the Cambodia Supreme Court against the lower courts verdicts in favour of Mr Dawe. We also asked if there were any reports published by The Phnom Penh Post of the alleged admissions the April 5 statement claims Mr Dawe made in open court during the previous hearings.

Mr Holmes responded to all of our questions saying ‘I am afraid I am unable to comment on these confidential matters any further, and refer you to the press statement once more’.

The most serious and damming accusations contained in its April 5 statement were also notably absent in The Phnom Penh Post‘s own April 6 story on the bailiffs visit.

Almost one month later with no one repeating the toxic accusations Mr Cochrane throws them into the public arena, conveniently at the same time that the sale of the publication is being finalised and Post Media’s alleged US$3.9 million tax bill is being ‘amicably settled’.

Among the wide range of services The Phnom Penh Post‘s new owner, Asia PR offers under the heading of ‘covert’ tasks is letters to the editor, and propaganda targeting, though there is no indication it stops there.

Whether The Phnom Penh Post‘s new owners had a role in the smoke and mirrors deflection will likely never be known. What is known is that a person that two courts of law have so far said is the victim has had his previously highly regarded reputation vesicated, and his medical condition disclosed for anyone to read based on one ‘leaked email’ whose origins can not be verified, containing accusations which appear to have been raised publicly for the first time just last month.

One of many reason that people become journalists is to provide an ear and a voice for ‘ordinary people’ battling bureaucracy, corporations, or against the odds and to expose the truth for any situation. It is generally not to beat down on victims, or to necessarily tear down credibility and reputations that took a lifetime to accrue in the absence of any credible evidence to the contrary.

Nor is it the media’s job to reveal to people for the first time that someone they know is ill, or dead. Names are routinely withheld from media reports until relatives of dead or injured people have been notified. For all anyone knows Mr Dawe might have told no one that he is receiving medical treatment in Bangkok, let alone for what.

With a blanket denial and no one saying publicly the email is genuine, except for Mr Cochrane and the person who sent it to him, one can’t help but wonder what the point of a story attacking a victim when you have nothing to substantiate the claim, or to refute the denial. It’s not until some 1,138 words later that there is perhaps a glimmer of understanding.

At the end of the story Mr Cochrane discloses that in 2004 he worked at The Phnom Penh Post and was managing editor there in 2005, making him just the latest in a long line of former journalists and editors to leap to the defence of The Phnom Penh Post since AEC News Today first broke news of its tax problems in March, brushing aside any notion of non-compliance or skulduggery going on there.

As the adjudged victim in the matter until the Cambodia Supreme Court rules otherwise, Mr Dawe (and all the other Mr, Ms, and Mrs ‘Dawe’s’ in the world) deserve better than this from the media. One can only wonder if Mr Cochrane would have been so ready to rip apart someone’s reputation and besmirch their character based on a single ‘leaked email’ if the other party was a bank, an insurance company, or a major conglomerate, rather than a media company that he had once worked for and led.

Disclosure: The author met Chris Dawe in Vietnam on no more than three brief occasions in 1998 or 1999 and has had no known contact with him since. Neither has the author ever worked with or for Mr Dawe and/ or any of his enterprises, or The Phnom Penh Post or any of its rivals.