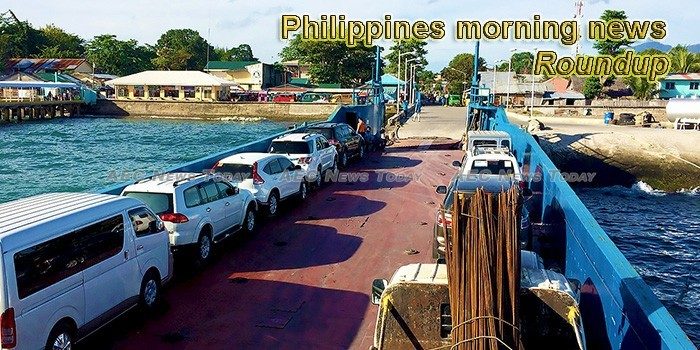 P1.1-B worth of cash, relief goods for ‘Ompong’ affected areas
With Typhoon Ompong threatening to hit a large part of the country, National Disaster Risk Reduction and Management Council (NDRRMC) executive director Ricardo Jalad said some PHP1.1 billion worth of cash and other relief items have been prepositioned in Regions 1 (Ilocos), 2 (Cagayan Valley), 3 (Central Luzon), and the Cordillera Administrative Region.
— Philippine News Agency

Hot money inflows highest in 4 months
Foreign portfolio investment inflows hit a four-month high of $225.85 million in August, reversing a net outflow of $57.52 million in the same month last year on the back of good second quarter corporate earnings results.
— The Philippine Star

Aboitiz-Ayala group to allot P15B for proposed ID system
A CONSORTIUM led by the Ayala and Aboitiz groups will be shelling out P15 billion for its proposal to design and develop the infrastructure for the country’s national identification (ID) system.
— BusinessWorld Online

UN decries ‘shameful’ reprisals on human rights activists in 38 countries, including PHL
The United Nations listed 38 “shameful” countries including China and Russia which it said had carried out reprisals or intimidation against people cooperating with it on human rights through killings, torture and arbitrary arrests.
— Philippines Magazine

Electronic exports up 5.38% in Jan-July
ELECTRONIC exports increased by 5.38 percent in the first seven months of 2018 to $21.61 billion (P1.15 trillion as of July 31) from $20.51 billion in the same period last year, the Semiconductor & Electronics Industries in the Philippines Foundation Inc. (Seipi) said on Thursday.
— The Manila Times

Economic team wants reforms ASAP: Immediate measures needed to address supply issues
An executive order (EO) that will remove administrative and non-tariff barriers on the importation of food items to temper inflation has been submitted yesterday by the Economic Development Cluster (EDC) to the Office of the President for implementation starting this month, the National Economic and Development Authority (NEDA) said.
— Malaya

Surging imports, inclement weather weigh down PH shipping
Aside from a weak peso, the local shipping industry is also weighed down by port congestion and the threat of inclement weather.
— ABS-CBN (video)

US investors lukewarm on New Clark City — DOF
The Department of Finance (DOF) has questioned the lack of US investors’ interest in the government’s project to develop Clark Freeport Zone, a former US military base, into the country’s next metropolis.
— The Philippine Star

Duterte threatens to personally select third telco
Philippines president Rodrigo Duterte has stated he will personally intervene in the selection process for the nation’s third telco and name the new player himself if no decision is made by November.
— Telecomasia.net

3 firms interested to develop BGC site into energy center
THE Philippine National Oil Co. (PNOC) said three companies have indicated their strong interest to develop the state firm’s 5.3-hectare site in Bonifacio Global City into an energy center, which will include a so-called Tower of Power.
— Business Mirror

PRRD on Trillanes’ arrest: ‘I don’t have the interest’
President Rodrigo Duterte on Thursday said nobody, including him, is interested to arrest Senator Antonio Trillanes IV.
— Philippine News Agency

Gov’t set to remove food import barriers this month
The National Economic and Development Authority (NEDA) said today that the government will remove administrative and non-tariff barriers on the importation of food items this month to temper the skyrocketing consumer prices.
— Manila Bulletin

Carriers mull over flight cuts to lessen tourist visit to Boracay
THE Department of Tourism (DOT) will be asking the country’s various airlines to reduce their number of flights to Kalibo and Caticlan in an effort to limit the number of tourists going to Boracay Island.
— Business Mirror

Duterte hikes Asian Games gold winners’ bonus to P8-M each
President Rodrigo Duterte on Wednesday vowed his continued support to the Philippine sports as he increased the cash bonus of gold winners in the recently-concluded Asian Games in Palembang-Jakarta to PHP8 million each.
— Philippine News Agency

Philippines typhoon: Millions in the path of the year’s strongest storm
Philippine authorities have begun evacuating thousands of people in the path of the most powerful typhoon of the season, closing schools, readying bulldozers for landslides and placing rescuers and troops on full alert in the country’s north.
— ABC News

NFA prepositions rice stocks in areas to be hit by ‘Ompong’
The National Food Authority (NFA) said Thursday it has prepositioned food security stocks in areas along the track of Typhoon Ompong, which was projected to hit the northern part of the country on Friday.
— Northbound Philippines

SMC confident investors will buy $2.7 B worth of shares in food unit
San Miguel Corp. (SMC) said it was confident of attracting investors to buy up to a $2.7-billion stake in its food and beverage unit, the Philippines’ biggest secondary share offering.
— Manila Bulletin

Banks given Nov. 30 deadline to include ACHs in e-channels
BANKS that offer InstaPay and PESONet are given until November 30 to make available on their electronic banking (e-banking) channels these payment platforms.
— Business Mirror

PITC offers to import 3m bags of rice
PHILIPPINE International Trading Corp., an attached agency of the Trade Department, proposed to import up to 150,000 metric tons or 3 million bags of rice to augment the current stock of the National Food Authority.
— Manilastandard.net

Regional centers to speed up technology transfer
The Philippine Center for Postharvest Development and Mechanization (PHilMech) will establish Regional Technology Management and Demonstration Centers (RTMDCs) that will help spearhead the agency’s efforts to commercialize its technologies and help form more agribusiness enterprises in the rural areas.
— The Manila Times

Philippines falls to Iran, stays in top 3 of Group F in World Cup qualifiers
The Philippines bowed to Iran, 81-73, in the second round of the group stage of the 2018 Fiba World Cup Asian Qualifiers Thursday at Azady Gym in Tehran.
— Inquirer.net