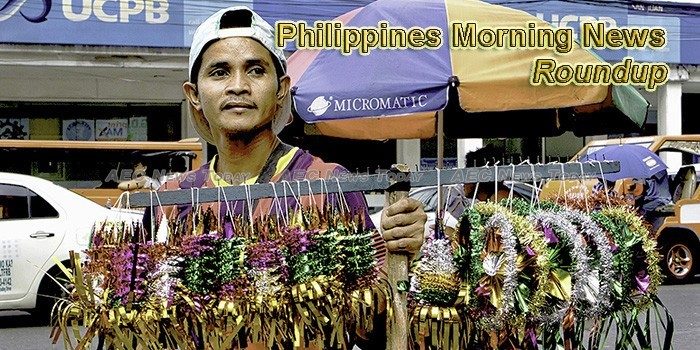 10k free HPV vaccines for Davao girls and women
The City Health Office is set to provide free Human Papillomavirus vaccines for women from June 1 to 5 to bolster its campaign against cervical cancer.
— Manilastandard.net

San Miguel revives plan to put up $100-million US brewery
San Miguel Brewery Inc. (SMB) has revived its plan to put up its first brewery in the US, allotting an investment of $100 million within the year, its top official said.
— Philippine Star

DFA: 100 protests filed vs China; Philippines keen on UN ruling
Foreign Affairs Secretary Alan Peter Cayetano said Wednesday the Philippines has filed close to 100 diplomatic protests against Chinese actions in the West Philippine Sea in two years even as National Security Adviser Hermogenes Esperon Jr. insisted that the country is not abandoning the favorable ruling of the Permanent Court of Arbitration.
— Manilastandard.net

Does Philippine Licensing Problems Offer An Opportunity To Thailand?
Philippines has for a number of years found itself in the unique position of being the only country in Asia that licenses online gambling sites, done under the auspices of the Philippine Amusement and Gaming Corporation (PAGCOR), which also runs land-based casinos in the country, along with VIP slots clubs and bingo parlours.
— Thailand Business News

Private sector key to priming Philippines to be top MICE destination, says PACEOS chair
By 2030, the Philippine meetings, incentives, conventions, and exhibitions (MICE) industry targets to earn a revenue of PhP 24.8 billion and achieve an International Congress and Convention Association (ICCA) rank of ten and above among countries in Asia Pacific and the Middle East.
— Marketing Interactive

‘Philippines must endure high prices’
Budget Secretary Benjamin Diokno on Wednesday said Filipinos should be “less of a crybaby” over the rapidly rising prices of goods and services as a result of the government’s tax reform law.
— Manilastandard.net

Philippines set to buy oil from Russia in June—Cusi
The Philippines is set to import oil from Russia next month to boost the country’s fuel reserves, Energy Secretary Alfonso Cusi said in a radio interview Wednesday.
— Manilastandard.net

More than 100 smuggled vehicles destroyed at Bureau of Customs
President Rodrigo Duterte on Wednesday led the destruction of more than a hundred smuggled cars and motorcycles worth more than P34 million, nearly four months after several luxury vehicles were destroyed in the government’s campaign against smuggling.
— Philippine Daily Inquirer

Jeepney operators stand to get P26,000 fuel subsidy
About 30,000 qualified jeepney operators could be looking at P26,000 in fuel subsidy every year as the Department of Transportation (DOTr) gears up to revive its Pantawid Pasada program at the end of 2018.
— Philippine Daily Inquirer

DENR prepares charges against owners of hidden pipes in Boracay
The Department of Environment and Natural Resources (DENR) has identified the business establishments that are illegally discharging untreated wastewater in Boracay through hidden pipes.
— Business Mirror

Group vows to fight ‘white collar’ crimes
The Anti-Crime Council of the Philippines (ACCP), broad-based multi-sectoral council was formally convened during the first Anti-illicit Trade Summit of the Fight Illicit Trade (Fight IT) Movement at the Fairmont Hotel in Makati City on Tuesday
— Malaya

BSP to launch banking sector outlook survey
THE Bangko Sentral ng Pilipinas (BSP) monetary board has approved the rollout of a semi-annual survey of the country’s top banking executives to gauge their sentiments in the industry in terms of important banking metrics.
— Business Mirror

Next PH-China bilateral talks on WPS expected in Q3
Philippine Ambassador to China Jose Santiago Sta. Romana said the next meeting for the bilateral consultative mechanism (BCM) between China and the Philippines is expected on the 2nd half of the year.
— Philippine News Agency