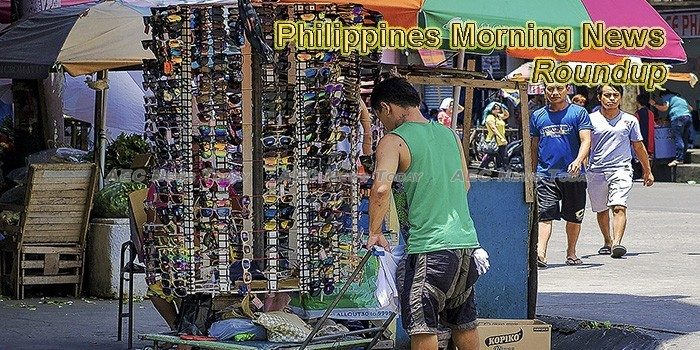 Local MSMEs eye $26-million export sales in 15th China-Asean expo
A Philippine delegation composed of around 100 micro, small and medium enterprises (MSMEs), led by the Department of Trade and Industry-Center for International Trade Expositions and Missions (DTI-Citem), will seek to penetrate the Chinese and Southeast Asian markets, and secure at least $26 million in export sales when they join in the 15th China-Asean Expo (CAExpo) from September 12 to 15, at the Nanning International Convention and Exhibition Center in Guangxi, China.
— Business Mirror

Trade deficit rises to 5-month high in May
The Philippines’ trade deficit further widened in May to a five-month high as exports shrunk while imports continued to grow, although at a slower annual pace, the statistics agency said.
— ABS-CBN

Philippines doles out cash to soften inflation’s blow
The Philippines has launched a fleet of subsidies to shield against accelerating inflation and criticism of doing little for the poor.
— Nikkei Asian Review (paywall)

Concom to ban reelection for Duterte
As President Duterte himself had supposedly requested, the consultative committee (Concom) tasked to review the 1987 Charter is banning him from seeking re-election under a new charter or even sitting as head of a transition team that would clear the way for a federal system of government.
— The Philippine Star

DPWH set to decide on P22-billion Cavite expressway
The Department of Public Works and Highways said it will decide this month on the unsolicited proposal of the unit of Metro Pacific Investments Corp. to build the P22.43-billion Cavite-Batangas Expressway.
— Manilastandard.net

How China’s e-vehicle demand boosts Philippines’ nickel industry
As the movement to ditch fossil fuels and turn to renewable energy slowly gains traction in developed countries, the mining sector in the Philippines is benefiting from the increased demand for nickel and other minerals.
— Rappler

‘Go Lokal’ earns P33-M since launch: DTI
Trade Secretary Ramon Lopez on Tuesday reported to President Rodrigo Duterte that “Go Lokal” marketing has earned PHP33 million as of May 2018 since it was launched in 2016.
— Philippine News Agency

Duterte sees lowest rating since becoming president – survey
Satisfaction in Philippine leader Rodrigo Duterte fell to the lowest of his presidency since coming into office in 2016, an independent survey showed on Tuesday.
— The Jakarta Post

Keeping foreign ownership cap to ‘impact’ investments: Euro chamber
The playing field will remain uneven if the 40-percent cap on foreign ownership of business is retained under a federal Philippines, the head of a European business group said Tuesday.
— ABS-CBN (video)

Assets of two Philippines residents frozen under Anti-terrorism Act
Trinidad and Tobago has frozen the assets of two residents of the Philippines deemed international terrorists after notice was given by the Office of the Attorney General on Monday.
— Loop

SMC to submit P3-billion Caticlan-Boracay bridge proposal
CONGLOMERATE San Miguel Corp. (SMC) said it will submit on July 11 its unsolicited proposal to the government for the P3-billion bridge connecting Boracay Island to nearby Caticlan.
— Business Mirror

Subsidies to financial services sector down 25 percent–PSA
Tax and other perks received by firms engaged in financial and insurance activities contracted by 25 percent, according to data released by the Philippine Statistics Authority (PSA) on Tuesday.
— Business Mirror

P2 million reward up for Nueva Ecija mayor killer’s arrest
The reward for information leading to the arrest of the killer of Mayor Ferdinand Bote of General Tinio town in Nueva Ecija is now P2 million.
— The Philippine Star

Duterte violates ‘moratorium’ on criticisms against church
A day after he agreed to a moratorium on his statements about the Catholic Church, President Rodrigo R. Duterte on Tuesday, July 10, rehashed his widely-criticized remarks, stressing anew that his “God is not stupid.”
— BusinessWorld Online

Nissan, Mitsubishi join Philippine electric car bandwagon
The Philippines expects to make a major leap into the production and sales of electric vehicles starting this year with the entry of the e-cars of Nissan Motor Philippine Inc. and Mitsubishi Motors Philippines Corp.
— Manilastandard.net