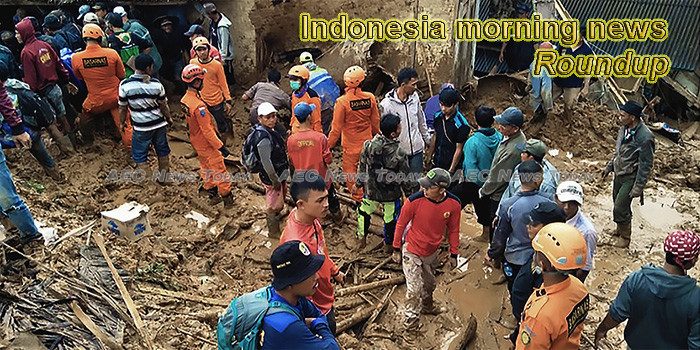 Indonesia’s conservative Islam regains clout ahead of elections
Religious intolerance is on the rise in Indonesia as conservative Muslims regain political clout ahead of general elections scheduled for April, a sign that the country is re-examining its Islamic foundations.
— Nikkei Asian Review (paywall)

Indonesia targets 7 percent growth in agroindustry
The Industry Ministry has targeted an increase of 7.1 percent in the agroindustry in 2019, higher than last year’s 6.93 percent, following a surge in domestic demand.
— The Jakarta Post

Indonesia`s measles rubella immunization coverage reaches 87.33 percent
The Measles and rubella (MR) immunization campaign in Indonesia has recorded a coverage of 87.33 percent on an average, according to an official of the Health Ministry.
— Antara News

Indonesia Faces Difficult Recovery After Series Of Natural Disasters
Intellasia East Asia News Indonesia has suffered a series of major earthquakes, tsunamis and landslides in the past three months, killing thousands and devastating parts of the country.
— Intellasia

Is Indonesian democracy up to the challenge?
Viewed from most places in Southeast Asia, Indonesia’s upcoming presidential and parliamentary elections seem a landmark in a democratic success story.
— East Asia Forum

Dissemination on Lion Air Paid Baggage Must Be Extended: House
Fary Djemi Francis, the chairman of the House of Representatives Commission V, deemed the annulment of the free baggage allowance for domestic flights of Lion Air and Wings Air of 20 kilograms and 10 kilograms per passengers could be detrimental to consumers.
— Tempo.co

Bekasi City to Impose Plastic Ban in March
The Bekasi administration will impose a ban on plastic starting March 2019. The ban will begin from modern stores in the city.
— Tempo.co

Developers push government for luxury residence incentives
Real Estate Indonesia (REI) is urging the government to fulfill its promise to introduce fiscal incentives for the development of luxury residences early this year, as part of its efforts to boost property sales and trigger growth in other sectors
— The Jakarta Post

Addressing challenges of fake news for Indonesia`s fair elections
Less than four months from now, Indonesia will have a new pair of president and vice president as a result of the 2019 Presidential Election scheduled on April 17.
— Antara News

Indonesia’s New Year’s Eve landslide death toll reaches 32: Official
At least 32 people were killed by a landslide in Indonesia on New Year’s Eve, the authorities said on Monday (Jan 7) as they ended a week-long search for missing victims.
— The Straits Times

News focus – Development of Indonesia-European Union partnership By Yuni Arisandy
Indonesia and the European Union (EU) have developed relations across a wide spectrum of areas in the space of a few years as outlined in the EU-Indonesia Partnership and Cooperation Agreement (PCA).
— Antara News

UI Med School Tuition among Cheapest: Dean
The dean of the Faculty of Medicine at the University of Indonesia (FKUI), Prof. Ari F Syam, claimed that the tuition of medical school in his institution was not pricey.
— Tempo.co

What are the National Public Holidays in Indonesia in 2019?
Indonesia is the world’s largest archipelago. Due to the country’s huge size it contains a high degree of diversity in terms of religion and traditional belief systems.

Drunk man shoots own foot, claims to be victim
A man who shot himself in the foot in South Tangerang, Banten has been charged for possession of an illegal firearm.
— The Jakarta Post

Ma’ruf Amin: Islamic State System Not Only Caliphate
Vice presidential hopeful number 01 Ma’ruf Amin said caliphate was not the only form of an Islamic state.
— Tempo.co

Jakarta: BPJS Patients Still Treated, Referred to Other Hospitals
The Jakarta Health Agency asserted that patients of the Healthcare and Social Security Agency (BPJS Kesehatan) would continue to receive treatment despite the temporary contract termination between BPJS and three regional hospitals (RSUD).
— Tempo.co

Balinese Man Finds Endangered Animal on his Doorstep
On Saturday, January 5, 2019, I Ketut Gede Yasa Ariana heard a neighbourhood dog barking frantically in front of his house. Ariana looked around and found a curled up pangolin on his property.
— Indonesia Expat

After getting injured in hit-and-run, Indonesian police chief shows grace, forgives driver
Despite the police chief breaking his collarbone in the accident, he chose not to press charges against the driver (who had turned himself in to the authorities).
— Coconuts Jakarta