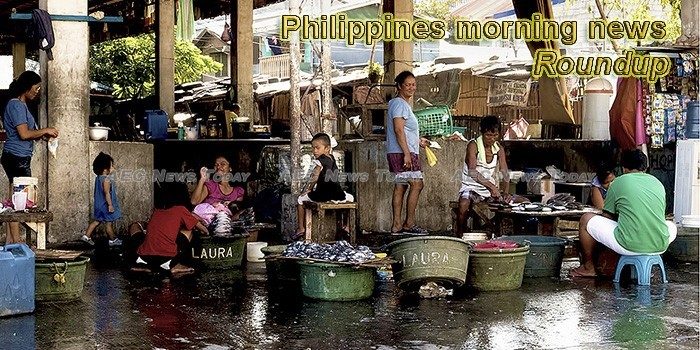 DTI provides P11.5M-loan to Marawi siege survivors
THE trade department has delivered a total of P11.5 million of loans to wounded soldiers and families of those killed in action during the siege of Marawi City.
— Business Mirror

‘State of Calamity’ Declared on a Philippines Island Due to Chikungunya Virus Outbreak
One of the central islands in the Philippines has been placed under a ‘state of calamity’.
— Precision Vaccinations

Moody’s Analytics forecasts Q2 GDP growth at 6.6%
Moody’s Analytics is betting on a 6.6 percent Gross Domestic Product (GDP) growth for the Philippines in the second quarter of 2018, which if achieved, would be solid performance from a country quickly earning a reputation as a regional growth leader.
— Philippine Canadian Inquirer

Duterte to sign national ID system bill into law
President Rodrigo Duterte is set to sign into law on Monday, August 6, the bill that will create the national identification system.
— Rappler

Duterte gives P2 million in cash to blast victims, kin
Josebel Garcia, 40, wept openly as President Rodrigo Duterte approached the hospital bed of her husband, Wilbert, who was one of the nine wounded in the July 31 bombing in the city of Lamitan, Basilan province, that killed 11 persons.
— Philippine Daily Inquirer

More than 2,000 mothers show their support for breastfeeding in a government-backed event aimed at combating child deaths in the Philippines
Hundreds of Philippine mothers breastfed their babies in public today wearing nipple headbands and superhero costumes.
— Daily Mail (video)

Poll: Inflation may have hit fresh 5.4-5.8% high in July
INFLATION likely accelerated further in July based on a Manila Times poll of economists, whose forecasts for the month ranged from 5.4-5.8 percent with a 5.5 percent average.
— The Manila Times

Perks for petroleum investors under Marcos-era decree may be casualty in TRAIN2, and this has MVP worried
BUSINESSMAN Manuel V. Pangilinan has expressed concern over how the second package of the Comprehensive Tax Reform Program, that seeks to rationalize fiscal incentives, will impact the upstream petroleum industry given the country’s need to find a suitable replacement for the gas now being produced in the Malampaya field in Palawan.
— Business Mirror

Exports seen to pick up in H2
Exporters are looking for “breakthroughs” necessary to achieve their $100-billion export revenue target, including full computerization of key government operations and access to developmental financing for micro, small and medium enterprises (MSMEs).
— Malaya

Solar PH to bid for India’s renewable projects
Solar Philippines plans to join the bidding for the renewable energy requirements of India and expects to sign a contract within the year, a top executive said.
— Manilastandard.net

TRAIN boosts BOC’s income in Cebu ports
WITH the TRAIN Law and efforts to reduce smuggling, the Bureau of Customs (BOC) Port of Cebu was able to collect P16 billion from January to July 2018, around P4 billion more than the P11.7 billion collected in the same period last year.
— Sun Star

P3.5 billion more allotted for Marawi rehab
Marawi City will get an additional P3.5 billion in funds for its rehabilitation efforts, a lawmaker from Mindanao said yesterday.
— The Philippine Star

House to rush charter change in ‘two months,’ says panel head Veloso
The House of Representatives, which will begin deliberating the proposed amendment of the Constitution this Tuesday, would wrap up the process in “two months.”
— Philippine Daily Inquirer

Govt anti-smuggling cases valued at P567M
A team composed of Bureau of Customs (BOC) personnel said the 30 cases filed at the Department of Justice (DOJ) for 2018 has a total value of more than half a billion pesos.
— Business Mirror

Court orders arrest of 5 tuna canning firm execs
The Pasig City Metropolitan Trial Court (MTC) ordered the arrest of George Sycip, son of the late tycoon Washington Sycip, and four other officials of a tuna processing company for violation of the Corporation Code of the Philippines.
— Philippine News Agency

P22B Cavitex extension proposed
Cavite Infrastructure Corp. (CIC), a tollway unit of Metro Pacific Investment Corp. (MPIC), said it will submit this month to the Toll Regulatory Board (TRB) a proposal to extend the Manila-Cavite Expressway from Kawit to Noveleta up to Rosario in Cavite.
— Malaya

Embassy warns of scam targeting Filipino expats in UAE
The Philippine Embassy in the UAE advised Filipino expats to exercise caution after the country’s Securities and Exchanges Commission (SEC) warned against a company that that dupes Filipinos into making fast cash through investments.
— Gulf News

Another increase in BSP rate looms
Inflation likely hit a new high in more than five years in July following the implementation of a jeepney fare hike and another round of increase in cigarette excise tax such that economists expect a further rate adjustment upward—by a much as 50 basis points—by the Bangko Sentral ng Pilipinas.
— Philippine Daily Inquirer

Siargao feeding program targets 1,850 children
FOR the next four months, Siargao will conduct a massive food-feeding program to help address malnourishment in some of the coastal municipalities and fishing villages in the pristine island.
— Business Mirror

Incentives pushed for energy efficient projects
A stronger push to legislate specific incentives to develop energy efficient (EE) projects is being sought from Congress to promote investments in energy-savings projects that will help reduce carbon emissions and energy usage.
— The Philippine Star

Farm-gate price of palay rose to all-time high in July
The average farm-gate price of unmilled rice as of the second week of July rose to an all time-high of P21.60 per kilogram (kg), data from the Philippine Statistics Authority (PSA) showed.
— Business Mirror