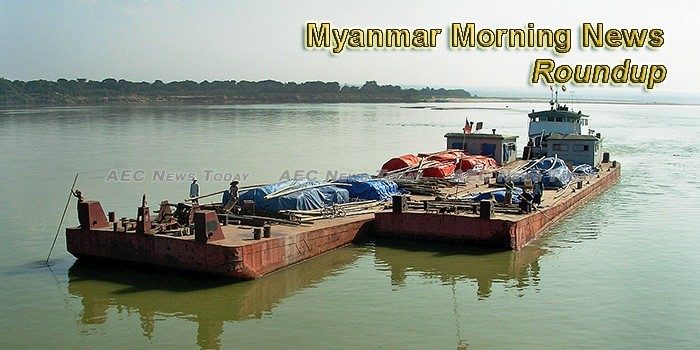 Malaysia makes record bust of crystal meth, shipped from Myanmar
Malaysia has made its largest ever seizure of crystal methamphetamine, officials said on Monday (May 28), finding nearly 1.2 tonnes of the drug disguised as tea in a shipment from Myanmar, and arrested six suspected traffickers.
— Channel NewsAsia

Government allocates K1.5 billion for medical research in 2018-19
A total of K1.5 billion (US$1.12 million) has been allocated for healthcare research in the coming budget year, according to U Hlaing Myint Thu, deputy director general of the Health and Sports Ministry’s Medical Research Department.
— The Myanmar Times

Myanmar police witness says searched Reuters reporters’ phones without warrant
Police in Myanmar examined the mobile phones of two Reuters reporters accused of possessing secret documents without a search warrant after their arrests in December, an officer told a court on Monday, in what has become a landmark press freedom case.
— Reuters

Advans Myanmar inks funding deals worth $1.44m with Yoma Bank
Advans Myanmar, a microfinance institution backed by Luxembourg-headquartered Advans Group, and Yoma Bank have closed three financial transactions in March worth $1.44 million to support its operations in the country, according to an announcement.
— DealStreetAsia

Myanmar Military Targets Other Ethnic Groups After Driving Rohingya Out
Myanmar’s military, fresh off a bloody campaign that drove most of the country’s Muslim Rohingya minority into neighboring Bangladesh, has launched a new offensive against the armed forces of an ethnic group along the northern border with China using helicopter gunships, jet fighters and heavy artillery.
— The Wall Street Journal

Punishing Ethnic Cleansing: EU Sanctions Myanmar Despite UN’s Resistance
The European Union has extended the scope of the punitive measures against Myanmar/Burma by broadening the current arms embargo and strengthening the export of dual-use goods for use by the military and border guard police.
— EU Bulletin

Myanmar amber preserves tick trapped in spider web for 99 million years
A tick that was caught in a spider’s web 99 million years ago in northern Myanmar has been discovered in a shard of fossilized amber, giving scientists a glimpse into the interactions between ancient arachnids.
— Coconuts Yangon

Myanmar objects to Bangladesh settlements near border
Population and families have been increasing in the prohibited place where no one lives near Myanmar-Bangladesh border out of the barbed wire fencing.
— Borneo Bulletin

Time for Myanmar to beat plastic pollution
We see it everywhere, use it everywhere. It is the miracle material that you can use for almost anything but it is now threatening our well-being and our planet more than ever. Plastic.
— The Myanmar Times

Myanmar receives back first 62 returnees from Bangladesh: gov’t
Myanmar has received first 62 returnees through Nga Khu Ya reception camp in Rakhine state, who had fled to Bangladesh due to the Rakhine conflict, according to a statement from the State Counselor’s Office Sunday.
— Ecns.cn

Myanmar president names Deloitte partner new finance minister
MYANMAR’S president on Monday nominated 80-year-old Soe Win, a well-known financial professional, as the next finance minister after the previous one resigned, amid reports he was being investigated over graft accusations.
— The Business Times

Myanmar president pardons 58 Rohingyas detained while returning from Bangladesh
A total of 62 returnees were arrested by Myanmar local authorities for illegally crossing the border, Irrawaddy reports quoting a brief statement released yesterday by the State Counsellor’s Office in Yangon.
— The Daily Star