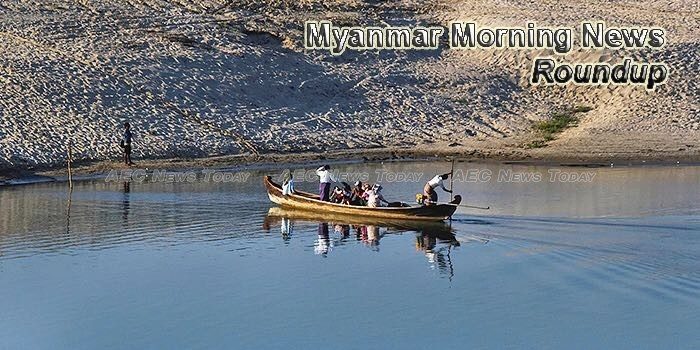 Government makes it official: Basic wage is K4800
Government ratified on Monday the new daily minimum wage K4800 (US$3.60) or K600 per hour for an eight-hour day after a nearly four-month delay since the National Tripartite Committee made the recommendation in January.
— The Myanmar Times

AirAsia CEO says talks about opening Myanmar airline have stopped
In an interview with Reuters in March, the chief executive, Tony Fernandes, said his budget carrier was in talks with a potential partner to open an airline serving Myanmar, which would help the low-cost carrier to cover up to 95 per cent of the Southeast Asian travel market.
— The Star Online

Delay in new automotive policy for Yangon alarms business groups
Two major business groups penned a letter to the commerce and transport ministries to complain about the delay in implementing the new vehicle registration system in Yangon.
— The Myanmar Times

Myanmar anti-war protester says police to lay more charges against him
Myanmar student activist Zayya Lwin said on Tuesday that police planned to press additional charges against him after he was detained on the weekend following a peace rally and criticized police at a poem-reading event in Yangon two days later.
— Reuters

Uncertainty grips Rohingyas as Myanmar approves 1,000 for repatriation
“Myanmar is my birthplace and I want to go back to Rakhine,” said Abul Hashem, 38, a Rohingya refugee living in Kutupalang Camp in Cox’s Bazar district with his family. But before repatriation, he demands the right to citizenship of Myanmar.
— Arab News

Dozens of Jade Miners Detained in Kachin After Wage Dispute Turns Violent
A police officer in the Lone Khin jade mining region of Kachin State said 50 miners were detained on Tuesday after a dispute over unpaid wages with their employer, Yadana Shwe Eaik, turned violent the night before.
— The Irrawaddy

JICA’s Dawei SEZ plan under fire for excluding site-wide assessment
Experts warn that implementation of the Japan-supported master plan for Dawei Special Economic Zone (SEZ) without a legally-required site-wide assessment would be “unlawful” and that transparency and meaningful public participation are necessary to determine who benefits from those plans before moving ahead.
— The Myanmar Times

7,000 Kachin displaced in Myanmar as violence escalates
Almost 7,000 people belonging to the largely Christian minority group in Kachin, northern Myanmar, have fled their houses since fighting between the army and a rebel group flared up in early April, according to recent figures from the Red Cross.
— Sight Magazine

Rakhine Developer Defies Gov’t Order to Halt New Town Project
A local developer led by influential businessman U Kyauk Taung is proceeding with a major construction project in southern Rakhine State in defiance of an order by the Union government to halt the work.
— The Irrawaddy