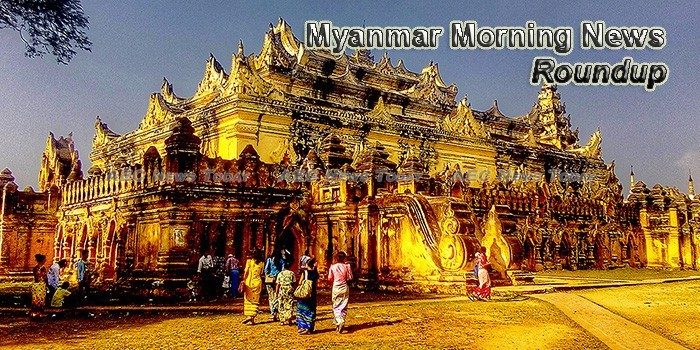 U.N. Security Council pushes Myanmar on accountability over Rohingya
The United Nations Security Council urged Myanmar’s government on Wednesday to carry out transparent investigations into accusations of violence against mainly Rohingya Muslims in the country’s Rakhine state and to allow immediate aid access to the region.
— Reuters

Myanmar Verifies More Than 1,000 Refugees in Bangladesh for Repatriation
Myanmar will repatriate more than 1,000 Muslim refugees who have fled northern Rakhine State for Bangladesh, Union Immigration and Population Minister U Thein Swe said on Monday.
— The Irrawaddy

Leeds United Myanmar tour: Questions still surround controversial trip after opening defeat
The post-season trip, which has been described as “morally corrupt” and “deeply inappropriate”, continues to divide opinion because of the treatment of Myanmar’s Rohingya Muslim minority.
— BBC

Thailand, Myanmar organizes return of 2nd batch of displaced persons
Governments of Thailand and Myanmar have successfully organized the return of the second group of 93 displaced persons from Myanmar to their homeland earlier this week, Thailand’s foreign ministry said late Wednesday.
— Xinhua Net

Extra $95m UK aid to refugees in Cox’s Bazaar ahead of monsoon
The UK’s Department for International Development (DFID) pledged fresh humanitarian support for the Rohingya people (whom the government prefers to call “Bengalis”) living in Cox’s Bazaar in Bangladesh on Monday.
— The Myanmar Times

Myanmar on edge after spike in child rapes
When the parents of a 2-year-old left the girl with her grandparents to forage for firewood on the outskirts of their village near Mandalay city a few days before Chinese New Year, they never imagined she was in danger.
— UCA News

Kachin State Government assists more than 4,000 displaced people
Dr. Khet Aung, Chief Minister of Kachin State, said the authorities has spent about 200 million kyat on assisting the residents who are stranded in the jungle amid armed conflicts in the state.
— The Global Newlight of Myanmar

Myanmar activist locked away for live-streaming anti-war performance
Myanmar’s military is undercutting peace efforts with the help of laws the civilian government has decided to keep in place.
— Coconuts Yangon