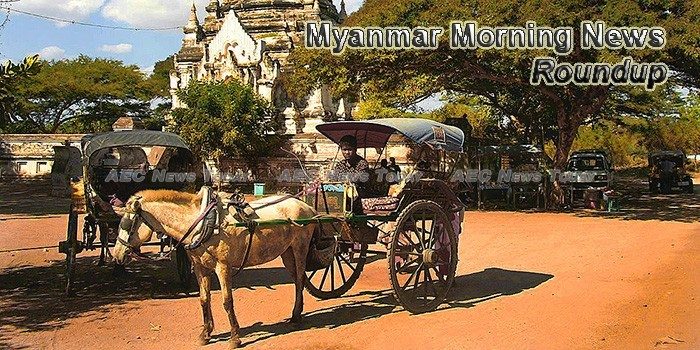 Myanmar needs ‘more transparency, strategies’
MYANMAR’S hopes of becoming Asia’s last frontier market would be realised only if the government could create a clear and transparent regulatory environment for attracting investment and financing the economy, according to Patrick Cooke, regional editor for Asia at Oxford Business Group (OBG), a global research and consultancy firm.
— The Nation

Unicef taps computer power to mine cryptocurrency and help Rohingya
Unicef Australia’s director of fundraising, Jennifer Tierney, said the HopePage will help provide lifesaving supplies to Rohingya children who fled their homes in Myanmar and are now living in one of the world’s largest refugee camps in Bangladesh.
— The Australian (paywall)

Police Officers Promoted, Transferred Amid Reuters Arrest Scandal
More than 50 police officers were promoted or transferred in a mass reshuffle this week in the wake of explosive court testimony accusing a brigadier general in the force of setting up two Reuters reporters for arrest in December.
— The Irrawaddy

Diplomats to tackle Rohingya crisis during Myanmar visit
Representatives of the 15 countries on the UN Security Council will fly from Bangladesh to Myanmar and meet its government on Monday, marking the highest-profile diplomatic mission since last year’s military crackdown that displaced 700,000 Muslim Rohingya.
— The Financial Times

Why the peaceful religion of Buddhism has grown violent in Sri Lanka (and Myanmar)
Clashes between Buddhist extremists and Muslims occurred in two different towns in Sri Lanka, Kandy and Ampara, in early 2018. Triggered in part by hate-filled posts spread by nationalistic Sinhala Buddhist Facebook groups, these riots resulted in the death of one Muslim and the destruction of many buildings.
— Scroll

Actual FDI inflows hit $ 4.34 bln
During 2017-2018 fiscal year, the actual foreign investments reached US$ 4.34 billion though Myanmar Investment Commission granted US$ 6.11 billion in foreign investment, according to a statement by Directorate of Investment and Company Administration.
— Eleven Myanmar

KNPP, Gov’t Agree to Further Peace Negotiations
Formal peace talks between the government and the Karenni National Progressive Party (KNPP) have made progress, with the two sides agreeing to create a mechanism for further negotiations as well as discussing military affairs, negotiators said on Friday.
— The Irrawaddy

Push to Refer Tatmadaw to ICC Could Harm Stability: USDP
Attempts to refer Myanmar’s military leaders to the International Criminal Court (ICC) in The Hague pose a serious threat to the country’s stability and transition to democracy, the Union Solidarity and Development Party (USDP) said on Thursday.
— The Irrawaddy

Second meeting for Rakhine State image promotion film
A meeting was held in the MRTV on Pyay Road in Yangon yesterday to discuss production of a film that depicts the beauty of Rakhine State and its people.
— The Global Newlight of Myanmar

28 Seek Hospital Treatment After Yangon Landfill Fire
A total of 28 people have been treated for smoke inhalation at the Hlaing Tharyar General Hospital after inhaling noxious smoke and fumes from the Htein Pin dumpsite fire that has been burning since Saturday.
— The Irrawaddy