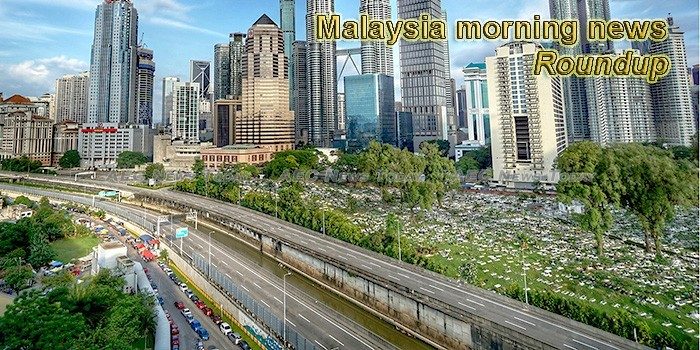 Tourism contributes 14.9 pct to Malaysia’s economy
The tourism industry continued its significant contribution to the country’s economic growth with a share of 14.9 per cent last year as compared to 10.4 per cent in 2005.
— New Straits Times

Fake Malaysian identities being used to enter Australia, claims report
Syndicates are using counterfeiting networks in the country to smuggle people into Australia, taking advantage of the visa agreement between the two nations, an Australian news outlet reported.
— FMT

Government should explore into capital gain inheritance taxes as other revenue sources: Economists
There is a need for the government to look for other source of tax revenue after Finance Minister Lim Guan Eng announced that the government is not planning to raise the corporate and individual tax rates.
— New Straits Times

Forest City: Is it about politics or economics?
Since my article on Prime Minister Dr Mahathir Mohamad’s wrong move on Forest City was published, there has been a great deal of reaction and numerous comments by the public.
— FMT

Sugar tax spells bitter times ahead?
Malaysia has had a long-standing relationship with sugar. With an average production of 1.678 million metric tonnes of sugar annually over the past five years, and bearing the badge of honour as one of the world’s top sugar importers, it is clear that sugar plays a very important part in Malaysia’s economy – and diet.
— The Borneo Post

Mahathir shares secret of his happy marriage
Dr Mahathir Mohammad has revealed his secret to being happily married to his soulmate Dr Siti Hasmah Mohamad Ali for the past 62 years.
— FMT

Buying opportunity in Asian markets for contrarians, says NUS professor
The current gross overvaluation of US markets and the corresponding dumping of Asian stocks provides a buying opportunity in this region, says a National University of Singapore (NUS) professor who has wide experience in asset management.
— The Star Online

Enhance Patriostism In Malaysia Day To Preserve Independence
The Malaysia Day Celebration must not focus merely on enjoyment, but rather on the importance of enhancing awareness and the spirit of patriotism to preserve the independence, Federal Territories Minister Khalid Abdul Samad said.
— New Straits Times

Malaysia artisanal mooncake makers keep baking into old age for the love of the job
They launched chocolate and butter mooncakes in Malaysia and at their peak turned out 100,000 a year; now couple and their daughter work at a smaller scale, hand-making the seasonal treats in batches as small as four dozen
— South China Morning Post

Key points from the Malaysia Agreement 1963
Still unclear about what’s in the agreement? We’ve broken it down for you.
— The Star Online

China’s technology vs Malaysia’s durians
Thanks to Dr Mahathir Mohamad’s vision, Malaysia took an early lead in IT with the Malaysian Institute of Microelectronic Systems or Mimos, the Multimedia Super Corridor (MSC), Cyberjaya and other initiatives.
— FMT

Vespa Limited Edition Scooters Launched In Malaysia
Vespa will donate $150 dollar to the RED project for every sale of a 946 (RED) as it will help them to buy 500 days of medication for an HIV/AIDS victim.
— GaadiWaadi

SINGAPORE AND MALAYSIA: SO NEAR TO EACH OTHER, SO FAR TO GO ON GAY RIGHTS
As a bisexual Muslim in Malaysia, where Islamic laws prohibit homosexuality and secular law bans sodomy, Amirah could be forgiven any pangs of envy she felt when the Indian Supreme Court this month decriminalised gay sex.
— South China Morning Post