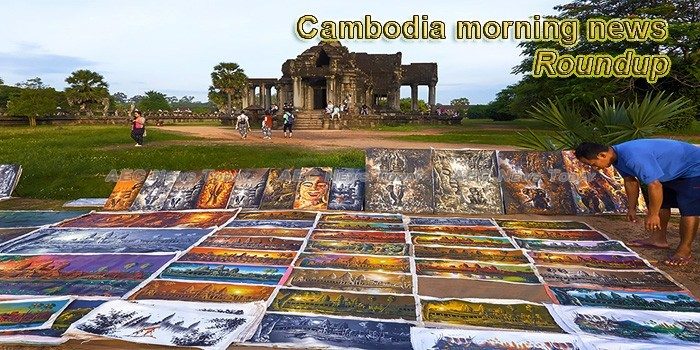 Trial of British offender hits Supreme Court
The Supreme Court heard the case of an alleged British rapist on Monday who has been sentenced to 10 years in prison for a 2009 incident in the capital.
— Phnom Penh Post

Local garment industry to benefit from trade war
With the trade war between the world’s two largest economies in full swing, a number of international brands are shifting production away from China, with Cambodia a strong contender to become their next base for the manufacturing of garments and footwear products.
— Khmer Times

Trade fairs to bolster the made-in-Cambodia brand
Local firms will be able to promote their products to local and foreign buyers at the Import-Export Product Exhibition, which will take place in December in the nation’s capital.
— Khmer Times

Mobile app tracks forest crimes
The Prey Lang Community Network (PLCN) has recorded 2,926 cases of forestry crimes in four provinces since February 2015, a report it released on Thursday said. It was based on data collected with a novel smartphone app.
— Phnom Penh Post

Release of Cambodian Opposition Chief Fails to Satisfy Hun Sen Critics
Cambodia released opposition leader Kem Sokha on bail Monday, a year after he was arrested on treason charges widely seen as politically motivated, but critics said he should never have been arrested and called for his banned party to be reinstated.
— Radio Free Asia

Cambodian Politics Enters Its Post-Election Phase
Following July’s massive victory in unfree and unfair elections, Cambodian Prime Minister Hun Sen, whose ruling party took every seat in the lower house, appears to be adopting a time-tested strategy he has used repeatedly in the past.
— Council on Foreign Relations

NSSF signs MoU to gain experience from the Philippines
The National Social Security Fund (NSSF) signed a memorandum of understanding (MoU) on Monday with The Philippine Health Insurance Corporation (PhilHealth) to transfer knowhow and foster the growth of NSSF officers.
— Phnom Penh Post

Cambodia Collects over $1.5B Tax Revenue within the First Eight Months 2018
Within the first eight months of 2018, the Cambodian government had collected about 6,013 billion Riels ($1,503.3 million) tax revenue, an increase of 12.58% compared to the same period last year, according to the report from the General Department of Taxation (GDT) released on Monday.
— Fresh News

Flood Affects 22 Cambodian Capital-Provinces in Eight Months, Kills 44
In the first eight months of 2018, at least 22 Cambodian capital-provinces were affected by flood and that 44 people passed away, according to Nhem Vannda, Executive Chairman of National Committee for Disaster Management on Monday.
— Fresh News

Land dispute Probe after ‘arson threat’ from official
Anlong Veng district authorities in Oddar Meanchey province are looking into a land dispute in Lomtong commune’s Lomtong Chas village after 12 families alleged that a two-star military general had threatened to set their houses ablaze if they refused to cede their land to him.
— Phnom Penh Post

PM to represent ‘legitimate government’ in China
Four days after the creation of the new government, Prime Minister Hun Sen left Cambodia on Monday for the 15th China-Asean Expo in Nanning city and an Asean meeting in Vietnamese capital Hanoi.
— Phnom Penh Post

Lucrative bird’s nest industry taking flight within Kingdom
They may look like abandoned concrete buildings from the outside, but facilities for the production of bird’s nests have been materialising in growing numbers along the Kingdom’s coast.
— Phnom Penh Post

Pattaya businesswoman gets stolen motorbike back from Cambodia
In a very rare case, a Pattaya woman has got back a motorcycle stolen from her rental shop after doggedly tracking its GPS position for several months and eventually locating it in Cambodia.
— The Nation

Interview: Milton Osborne, on Pol Pot and Cambodia’s Development
His latest work, “Pol Pot Solved the Leprosy Problem: Remembering Colonial and Post-Colonial Worlds”, is a memoir of his days as a young diplomat in Phnom Penh between 1959 and 1961.
— VOA