Malaysia Morning News For May 21 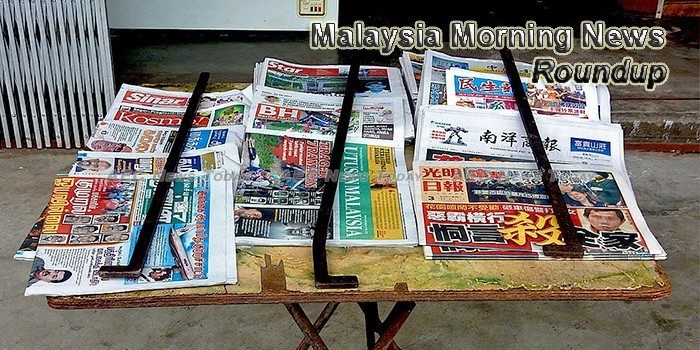 Malaysia: Najib Razak to face anti-graft investigators as pressure mounts
Former PM is under fire over alleged looting of state funds as police raids on his home force his wife to issue a statement denouncing media coverage.
— The Guardian

Malaysia’s 2018 economic growth expected to remain above 5%
Malaysia’s first quarter (1Q18) gross domestic product (GDP) growth came in at 5.4% year on year, lower than the consensus projection but AmBank Research is maintaining its 5.5% GDP growth for this year as it expects private consumption and the services sectors to continue to support growth together with other areas of business activities.
— The Sun Daily

Malaysia’s Economic Fortunes Lie in the Hands of These 5 People
Malaysia’s 92-year-old Prime Minister Mahathir Mohamad is moving quickly to meet his 100-day campaign pledges that helped sweep him into office.
— Bloomberg

Malaysia Won’t Look Away From China So Soon, Despite Mahathir’s Words
Why Malaysia’s China policy is unlikely to change, for now, despite the election shock.
— The Diplomat (paywall)

Malaysian firms offer 6% discounts ahead of GST removal on June 1
Businesses in Malaysia have begun putting up 6 per cent discount offers in response to the Government’s decision to zero rate the goods and services tax (GST) from June 1.
— The New Paper

Fall of a Malaysian Dynasty Puts Target on Alleged 1MDB Mastermind
The alleged mastermind behind one of this decade’s greatest global financial scandals was seen earlier this month relaxing on the Thai resort island of Phuket.
— The Wall Street Journal

Market volatility to spur more share buybacks
More companies and substantial shareholders are expected to launch share buybacks, at a time when share prices have tumbled as the equity market goes through a period of volatility amid changes in the government and policies following the surprise win by Pakatan Harapan in the 14th general election.
— The Sun Daily

Perisai Petroleum lays out plan to cut debt and raise cash
Practice Note 17 Perisai Petroleum Teknologi Bhd (PPTB) on Friday announced that its plans to cancel off accumulated losses, issue shares and irredeemable and redeemable unsecured loan stocks to settle debt and a rights issue to raise funds to focus its business on the oil drilling rig of the group and the FPSO (floating production storage and offloading) unit, namely Perisai Kamelia, as part of its business rationalisation exercise.
— The Sun Daily

How Ipoh is becoming a new Malaysia food destination, to rival Kuala Lumpur and Penang
Swinging off the motorway into Ipoh’s outskirts, we pass massive limestone outcrops jutting skyward. Those are soon blocked from view by colossal hotel and office blocks that seem to have risen as man-made rivals.
— South China Morning Post

Malaysia Bourse Likely To Remain Rangebound
The Malaysia stock market has alternated between positive and negative finishes through the last four trading days since the end of the two-day winning streak in which it had advanced more than 20 points or 1.2 percent.
— Nasdaq

Bond money never reached TRX City
TRX City Sdn Bhd never got the money it was supposed to receive from the US$3bil that was raised in 2013, although different statements in 2013 said that money would be used to develop the 70 acres of land.
— The Star Online

How digitalisation is changing e-commerce
THE Internet has revolutionised many aspects of our lives, from the way we work, socialise and even the way we shop.
— Digital News Asia

Indonesia, Malaysia show Southeast Asia’s importance
Bloody, murderous terrorist attacks in Indonesia in mid-May have provided the Islamic State with another opportunity to claim victory. Two families including young children carried out suicide bombings in Surabaya, the second-largest city in the nation.
— The Augusta Chronicle