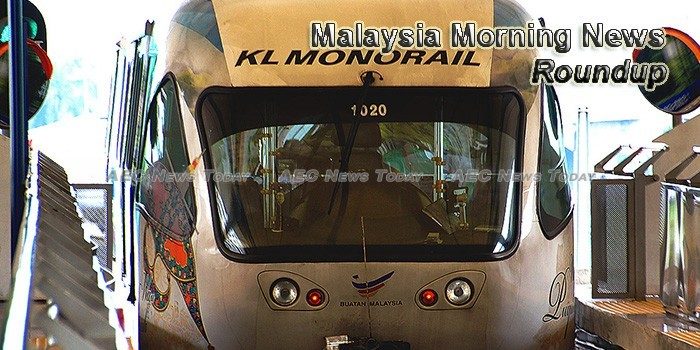 US tariff on steel, aluminium imports will impact Malaysia
The imposition of tariffs on the import of steel and aluminium products by the United States (US) will also impact Malaysia.
— New Straits Times

RHB shifts focus back to Malaysia amid digital push
RHB Bank Bhd has shelved plans to become a banking powerhouse in the Association of Southeast Asian Nations (Asean) region by 2020 as it focuses on growing its Malaysian business.
— The Edge Markets

PM Najib : Malaysia development gauge includes per capita income, people’s happiness
Prime Minister Datuk Seri Najib Tun Razak said he wanted to make Malaysia one of the top 20 countries in the world in terms of its development, and at the same time ensure that the people live happily.
— The Edge Markets

BNM aims to cut cost of sending funds in Sabah to 3pc
Bank Negara Malaysia (BNM) aims to reduce the cost of remitting funds in Sabah from 4.5 per cent to three per cent in the next two years, said Director of Money Services Business Regulation Department, Nik Mohd Din Nik Musa.
— Malay Mail

Australia freezes $328k in senior Malaysia cop’s account
A senior Malaysian police officer has had A$320,000 (S$328,000) in his bank account frozen by the Australian authorities on suspicion of money laundering.
— The Edge Markets

Pushing the business and political nexus too far is bad
JUST a few months ago, we had an Umno division leader smashing beer bottles at the gates of the Selangor Government’s state secretariat over its decision to allow Octoberfest to be held in the state.
— The Star Online

Renewed Support Expected For Malaysia Stock Market
The Malaysia stock market has alternated between positive and negative finishes through the last nine trading days since the end of the five-day winning streak in which it had gathered almost 40 points or 2.2 percent.
— Nasdaq