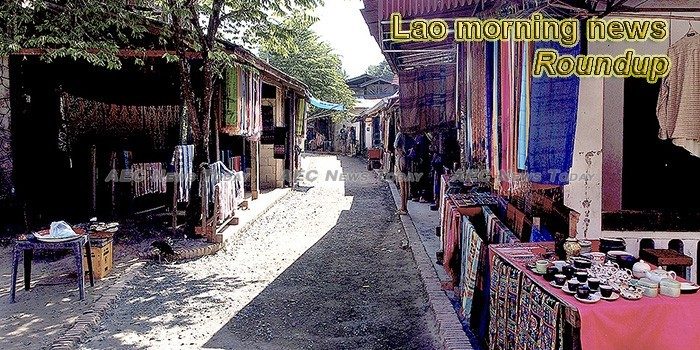 Hundreds missing in Laos after collapse of dam under construction
Hundreds of people in southern Laos are missing and many are feared dead a day after a hydropower dam under construction broke, killing several as it swept away homes in flash flooding, state media reported on Tuesday.
— Reuters

Tropical Cyclone Son-Tinh makes landfall again
It is possible the rain from tropical storm then depression Son-Tinh contributed to the collapse of a hydroelectric dam in Attapeu province, Laos.
— Aljazeera

Dam collapse dents Laos’ “battery of Asia” ambitions
The collapse of a hydropower dam under construction by a South Korean company in southeastern Laos in the evening of July 23 is a big setback for the secretive country’s vision to become the main supplier of electricity for Southeast Asia through the construction and operation of a series of hydropower facilities along the country’s many rivers.
— Investine

Govt discusses Lao Red Cross law contents
Government officials met in the capital yesterday to learn about the Law on Lao Red Cross with the aim to give participants more understanding about the regulation.
— Vientiane Times

Two dead, more missing as PM flies to flooded south
At least two people are confirmed dead as of 4:30 pm yesterday and a number of villagers are still missing in Laos’ southern Attapeu province after one of the dams at Xe Pian Xe Namnoy hydropower was crested causing flash flooding, a senior provincial official has said.
— Vientiane Times

PM Suspens Monthly Meeting, Leads Ministers To Flooded Sanamxay
Prime Minister Thongloun Sisoulith has suspended the planned monthly meeting of the government for August and led his cabinet members and other senior officials to Sanamxay to monitor rescue and relief efforts being made for flood victims.
— Lao News Agency

Saravan-Ubon Mekong bridge plan has Laos, Thailand talking
The bridge is set to be the sixth Lao-Thai Friendship Bridge and will not only connect southern Laos to Thailand but help link the land-locked nation with the rest of the region.
— Vientiane times

Hundreds missing in Laos after hydropower dam collapse
Hundreds of people are missing and an unknown number believed dead after the collapse of a hydropower dam under construction in southeast Laos, state media reported Tuesday.
— The Jakarta Post