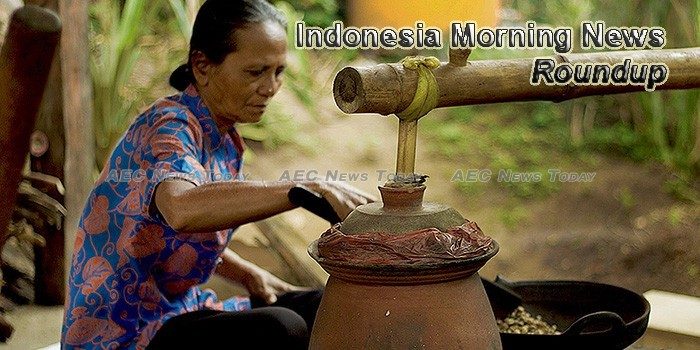 Indonesia seizes luxury yacht linked to 1MDB investigation
Indonesia on Wednesday seized a luxury yacht on the island of Bali sought by the US Department of Justice (DOJ) as part of a multi-billion dollar corruption investigation linked to Malaysian state fund 1Malaysia Development Berhad (1MDB).
— The Star Online

Gov’t Allows Work on 34 Elevated Infrastructure Projects to Proceed After Safety Audit
The Ministry of Public Works and Housing has allowed work on 34 elevated
infrastructure construction projects to resume after the National Construction Safety Committee finalized a series of safety audits.
— Jakarta Globe

The opening up of Indonesian higher education must go further
Indonesian law has permitted foreign universities to set up in the country since 2012. However, to come into effect, a ministerial decree is required – and eight years on, we are still waiting.
— Times Higher Education

Vale sees huge losses amid stronger oil, coal prices in 2017
Publicly listed nickel miner PT Vale Indonesia recorded a net loss of US$15.27 million in 2017, a significant fall from its net profit of $1.9 million booked in the previous year.
— The Jakarta Post

The increasing Shariah influence in Indonesia
In Aceh Indonesia, every night well-disciplined troops in green uniforms roam the streets. They are the Sharia police. They approach young couples sitting together, questioning them to ensure they are married. Sometimes they approach groups of men. If they find any of them gambling, they arrest them. Those arrested end up in front of an “executioner” and are publicly caned.
— Asean Today

Indonesian Chinese fight ‘racist’ land rights edict
An ethnic Chinese lawyer is to appeal after failing in a court bid to overturn a “racist” edict issued by an Indonesian provincial governor more than 40 years ago prohibiting people of Chinese descent from owning land.
— UCA News

Bank Mega Pays out Dividends of IDR650 Bln
PT Bank Mega Tbk (IDX:MEGA) in the Annual General Meeting (AGM) of Shareholders agreed to allocate a portion of 2017 net profit amounting to IDR650 billion to be distributed to shareholders as dividends.
— Netral News

Indonesia’s Naval Modernization Continues With New Fast Attack Craft Launch
On Tuesday, Indonesia officially launched the fourth in a series of locally-built fast attack crafts. Though this scheduled event did mark another advance for Jakarta in its quest to build up its capabilities, it also reinforced the significant gaps that remain and how far it has left to go.
— The Diplomat

Currency of Indonesia Update: Rupiah Feels Impact of Powell Speech
Based on the Bloomberg Dollar Index the Indonesian rupiah depreciated 0.53 percent to IDR 13,751 per US dollar on Wednesday (28/02), the weakest level against the greenback in slightly over two years. The weakening of the rupiah is in line with the performance of most other currencies as the US dollar is at a three-week high after Federal Reserve Chairman Jerome Powell struck a hawkish tone in his first congressional testimony.
— Indonesia Investments (media release)

Indonesia stocks lower at close of trade; IDX Composite Index down 0.03%
Indonesia stocks were lower after the close on Wednesday, as losses in the Miscellaneous Industry, Financials and Trade sectors led shares lower.
— Investing.com