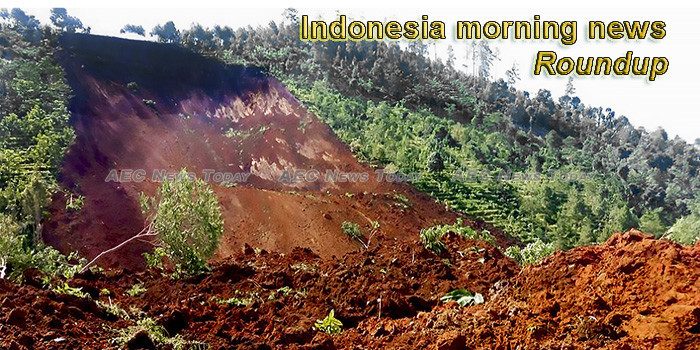 Hardliners pull out Islam card on Jokowi
The radical Indonesian cleric behind the push to jail former Jakarta governor Ahok for blasphemy has declared it unIslamic to vote for any parties who supported him — a thinly veiled attack on President Joko Widodo — at a mass rally yesterday, setting the stage for another bitterly divisive election influenced by political Islam.
— The Australian

Indonesian island clean-up nets 40 tonnes of rubbish daily
Residents on a string of coral-fringed islands off Jakarta’s coast are battling a tidal wave of trash, with more than 40 tonnes of rubbish collected daily over the past week, an official said. Indonesian authorities have deployed an army of staff and a fleet of boats to help clear rubbish-infested shorelines and surrounding waters
— Intellasia

President Jokowi Urges Using Rubber for Asphalt Mixture
Indonesia President Joko ‘Jokowi’ Widodo has instructed to buy rubber from farmers. For this reason, the Indonesia Ministry of Public Works and People’s Housing is set to use rubber as a mixture of rubber asphalt. The instruction was conveyed by President Jokowi when meeting with rubber farmers in Palembang, South Sumatra, some time ago.
— Netral News

Indonesia deepens cooperation with the US in the fight against terror
On the sidelines of the 87th Interpol General Assembly on 18-21 November 2018 in Dubai, the US and Indonesia reached an agreement to strengthen cooperation in counter-terrorism efforts.
— Asean Today

Flight control ‘main problem’ for crashed Lion Air plane, say aviation experts
Amid the controversy surrounding the airworthiness of Lion Air flight JT610, aviation experts said on Friday (Nov 30) that the investigation into the plane crash should centre on the flight control that was found to be flawed.
— The Straits Times

Another Ahok? Chinese Christian faces blasphemy rap in Muslim Indonesia
When Indonesian politician Grace Natalie pledged her party would not support discriminatory local laws based on “the Bible or sharia”, she probably did not expect to be investigated by police.
— South China Morning Post

Two decades on, families of rights abuse victims still seek justice
Every Thursday for more than 560 weeks, Ms Maria Katarina Sumarsih, clad in black and holding a black umbrella, has stood in front of the presidential palace in Jakarta.
— The Straits Times

No damage and no tsunami threat from offshore Indonesia quake
A magnitude 6.5 earthquake that struck off the coast of Indonesia’s Tanimbar Islands on Saturday (Dec 1) caused no damage and created no threat of a tsunami, Indonesian authorities said.
— The Straits Times

Islamists hold huge rally in Jakarta
Tens of thousands of Indonesian Muslims held a rally in Jakarta on Sunday led by hard-line groups who had agitated to remove the city’s Christian governor, underscoring the growing influence of Islamist groups ahead of elections in 2019.
— Bangkok Post

West Papuans demand independence at Indonesia rally
About 300 West Papuan demonstrators calling for independence for the restive Indonesian region faced off with counterprotesters Saturday in the country’s second-largest city.
— The Washington Post

Diversified financing to boost private investment in Indonesian infrastructure
Indonesia has sought to increase private sector participation in major infrastructure projects, unveiling a series of new developments and announcing a shift in funding policy that could open the door to more international and domestic investors.
— The Borneo Post

Indonesia: Inmates Bust Out of Aceh Prison during Muslim Prayers
Hundreds of officers were deployed Friday to capture more than 100 inmates who used barbells to smash windows and metal bars to escape from a prison near the capital of Indonesia’s Aceh province, police said.
— Benar News

Wet and wild ride: Indonesian mud bull races not for faint of heart
Waves of muddy water slosh over the jockey as he hangs on to the tails of a pair of bulls galloping across the rice paddy.
— The Straits Times

When disaster strikes, Indonesia turns to one man
When Mount Agung erupted and brought Bali to a standstill, Dr Sutopo Purwo Nugroho was hooked up to an IV line, breathing through one lung and issuing press releases to journalists. While fighting his own battle with cancer, the spokesman for Indonesia’s national disaster management agency continues to calm the nation through wildfires, landslides, floods and earthquakes.
— The Straits Times

Sukabumi airport construction to begin in 2019
Sukabumi Airport in West Java will be built in early 2019, a local official said here on Sunday.
— Antara News

Indonesian president calls for Freeport deal to be wrapped up quickly
Indonesia’s president picks a Muslim scholar as his running mateIndonesian President Joko Widodo called on Thursday for an “immediate” end to issues holding up the country’s plans to acquire a majority stake in Freeport-McMoRan Inc’s giant Grasberg copper mine in Papua.
— Intellasia