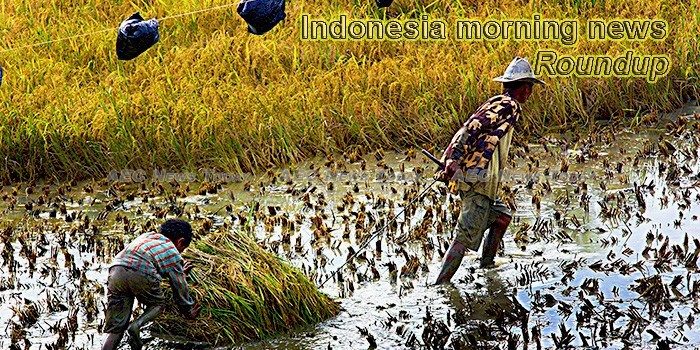 QUAKE SLAM Bali earthquake: Indonesia hit by 5.2-magnitude quake in tourist hub as Indonesia faces more tremors
Tourists reported being woken up by the ground shaking violently beneath them, and others said they fled their hotels.
— The Sun

BNPB: No Reports of Missing Victims, Damages Totaling IDR 7.7 Trillion
Head of Information Data Center and Public Relations of the National Disaster Management Agency (BNPB) Sutopo Purwo Nugroho confirmed that there were no reports of victims missing or buried under a building from the Lombok quake.
— Netral News

Industry Ministry asks for more budget for Indonesia 4.0
The Industry Ministry has proposed for additional budget of Rp2.57 trillion to finance implementation of the national agenda in line with the road map of Making Indonesia 4.0 as a strategy in entering the era of the 4th industrial revolution.
— Antara News

Facebook Holds Digital Training for Indonesian SMEs
Facebook have been focusing heavily on making investments to develop Small-Medium Enterprises (SMEs) all over the globe, including in Indonesia.
— Tempo.co

Fresh out of Y Combinator, Indonesian startup launches investing app
Just over a million of Indonesia’s 261 million population have a portfolio of shares. That’s only 0.4 percent.
— Tech in Asia

Blasphemy Conviction Against Buddhist Woman Seen as Threat to Freedom of Expression
The executive board of Nahdlatul Ulama, the world’s largest independent Muslim organization, said complaints about the volume of a mosque’s loudspeakers should not be considered blasphemy, after the Medan District Court in North Sumatra sentenced an Indonesian woman of Chinese descent to 18 months in prison for insulting Islam.
— Jakarta Globe

ASEAN is Indonesia’s past, not its future
In re-examining the legacy of former president Suharto in Indonesia’s foreign relations, the proverb ‘old soldiers never die they just fade away’ seems appropriate.
— East Asia Forum

Foreign Journalists Criticize Asian Games Media Services
Foreign journalists have voiced concern over some of the services provided by the organizers of this year’s Asian Games, currently underway in Jakarta and Palembang, South Sumatra.
— Jakarta Globe

Village Ministry Hands Over Seven Sacrificial Cows for Bengkulu
The Ministry of Village, Development of Disadvantaged Areas, and Transmigration handed over seven sacrificial cows to be slaughtered on Eid al-Adha (Festive of Sacrifice) 1439H in Bengkulu.
— Netral News

A round of applause as Jakarta reach for the stars
JAKARTA, despite given only three years to get ready for the Asian Games, have certainly put up a good show.
— The Star Online

Minister Susi Urges Local Government to Make Policy on Plastic
The Maritime and Fisheries Affairs Minister Susi Pudjistuti, appealed to all regional governments to issue policy regarding the use of plastic.
— Tempo.co

Is Indonesia’s celebrated antigraft agency missing the corruption for the trees?
In 2005, an Indonesian election commissioner named Mulyana Kusumah visited a hotel room in Jakarta to hand over 150 million rupiah, then worth more than $15,000, in cash to an official from the state audit board.
— Mongabay.com

Asian Games, Jakarta Aims for More Investors
Jakarta’s role as the host of the 2018 Asian Games, which involved 11,478 athletes from 45 countries, has gained the attention of the Jakarta Investment and Single Window Integrated Services Agency (DPMPTSP) as the right momentum to attract more investors.
— Tempo.co