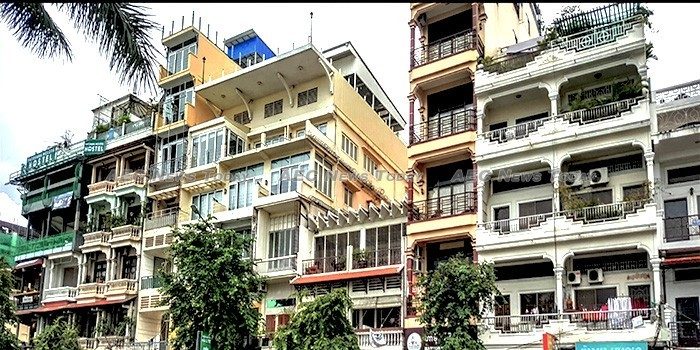 In January 2018 Chinese Premier Li Keqiang visited Cambodia and oversaw the signing of 19 new development deals. The deals were announced just a few weeks after Chinese firms pledged to invest an additional US$7 billion in Cambodia, including for a highway construction project that will connect the capital city of Phnom Penh with the country’s main port city, Sihanoukville.

The cityscapes of Cambodia’s urban centres, most notably Phnom Penh, Battambang, and Sihanoukville, are beginning to show tangible signs of Chinese foreign investment. Last year 3,488 high-end residential units such as luxury apartments and condominiums were added to the Phnom Penh housing market. Another 15,688 luxury units are forecast to be complete in 2018.

Traditionally a low-rise city, Phnom Penh has seen many high-rise buildings appear across its landscape since 2014 — the first year in which the construction and real estate sector became one of Cambodia’s four economic pillars.

Phnom Penh faces significant — and growing — challenges regarding the provision of basic services such as drainage, public transport, waste management and wastewater treatment.

Most of Cambodia’s urbanisation and land management laws or policies only date back to 2001 and have largely not been implemented.

One of the most pressing causes for concern is the lack of affordable housing in Phnom Penh, which is forcing many mid- to low-income Cambodians to move to the outskirts of the city.

It is projected that Phnom Penh’s population will increase by more than 50 per cent by 2030, up to 7.9 million. According to conservative government estimates this will create demand for an additional 800,000 homes within the next 13 years.

The Cambodian government recognises the emerging housing crisis in its capital. In 2014 it responded by releasing the National Housing Policy, which states that all city dwellers have the right to adequate housing. However, the implementation of this policy has been ineffective, leaving many of Cambodia’s urban poor in vulnerable conditions.

Chinese investment is welcomed by Cambodian authorities to help alleviate the country’s growing urbanisation and housing concerns, but questions are being raised about the long-term sustainability and economic effectiveness of Chinese real estate projects in Phnom Penh, which are criticised for mostly benefiting the nation’s affluent.

The ‘privatisation of urbanisation’ in Phnom Penh, supported by Chinese foreign direct investment, is almost exclusively aimed at the Cambodian upper class and at Chinese tourists and businesspeople.

While few of the large real estate projects in Phnom Penh provide exact figures on the nationality of their tenants, it is estimated that about 90 per cent of units are sold to Chinese citizens. This drives the city’s housing prices up to the point where the units are unaffordable for most Cambodians.

The luxurious, Western-style design of many of the Chinese-built apartments is also out of sync with traditional Cambodian architecture and can be unappealing even to middle- and upper-class Cambodians. As a result, Chinese real estate development projects in Phnom Penh frequently do not integrate with the broader urban fabric and instead form satellite cities within the capital that are largely disconnected from their wider surroundings.

The construction of these projects also often requires the displacement of previous residents and the infilling of lakes, to the detriment of the existing urban infrastructure.

Another concern is the true intentions behind Chinese real estate investments in Cambodia.

Observers note that more than half of the luxury apartments and condominiums in Phnom Penh bought by Chinese nationals are paid for in cash.

This could suggest that the acquisition of such properties is a front for money laundering by wealthy Chinese citizens who are worried about their home country’s mounting debts and unpredictable authorities.

Being primarily a cash economy, Cambodia has lax internal banking controls and few enforced policies against money laundering. This makes it an appealing environment to any wealthy Chinese businessperson who wants to usher their excess money out of reach of the Chinese government, which has been targeting corruption on an unprecedented scale in recent years.

This means Chinese investment in the Phnom Penh real estate market is unlikely to be sensitive to Cambodian demand.

The growing Phnom Penh housing bubble could very well result in an oversupply of empty, overpriced condos in the capital, while much of the Cambodian urban population remains locked out of the housing market.

It is essential that the Cambodian authorities who are concerned with urban planning introduce policy planning and implementation processes that can prevent Phnom Penh from becoming caught in a pattern of unsustainable growth.

Hannah Elten is a postgraduate research associate at the German Development Institute, Bonn. She is a 2018 Schwarzman Scholar. Her article first appeared on East Asia Forum under a Creative Commons License and is reproduced here with its permission.