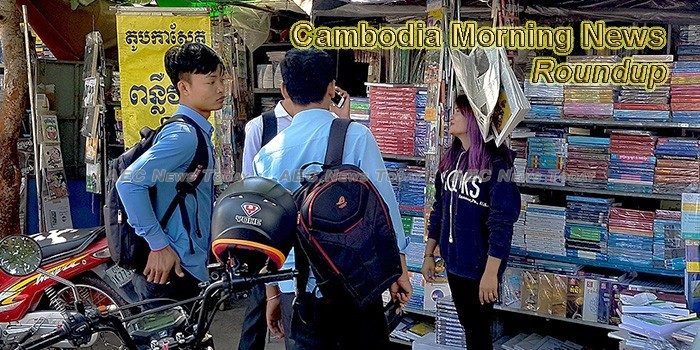 Premier calls for more investment from neighbours
Prime Minister Hun Sen on Friday called for investors in ACMECS member countries to consider business opportunities in Cambodia, where, he says, the government has undertaken key reforms to improve the business climate.
— Khmer Times

Nearly $2B in investments cleared by CDC
The Council for the Development of Cambodia (CDC), the government body in charge of approving large-scale investments, announced on Thursday that it had approved four projects with a combined total capital investment of nearly $2 billion. It said the four projects would create 11,193 jobs.
— The Phnom Penh Post

Cambodia-China to Conduct “Golden Dragon Military Exercise” in 2019
Speaking after a meeting with Chinese Defense Minister Wei Fenghe on Sunday at the Council of Ministers, Cambodian Defense Minister Tea Banh said that Cambodia and China will jointly conduct Golden Dragon Military Exercise in 2019 to deepen ties and mutual understanding of defense of the two countries.
— Fresh News

A discussion on tax compliance with EuroCham’s Chhiv Kimsroy
Fresh from organising a well-attended tax forum in Siem Reap this month, Chhiv Kimsroy, the tax committee director at the European Chamber of Commerce, sits down with Khmer Times’ Chea Vannak to share her views on Cambodia’s evolving tax system.​
— Khmer Times

Fasmec brings in website for SMEs
Cambodian entrepreneurs who are members of the Federation of Association for Small and Medium Enterprises of Cambodia (Fasmec), can soon display and sell their products on a new shopping website, thanks to a partnership with London-based Sram & Mram Resources Ltd.
— The Phnom Penh Post

Cambodia committed to vocational education and training: Ministry
With the development of the country’s human capital as a top priority, the government on Friday asked the private sector as well as national and international organisations to work with the Ministry of Labour to boost vocational education in the Kingdom.
— Khmer Times

Over 100 tonnes of illegal items destroyed in K Speu
More than 100 tonnes of fake, expired and illegal products with banned chemical substances were destroyed on Thursday in Kampong Speu province on the orders of Interior Minister Sar Kheng.
— The Phnom Penh Post

Cambodian Immigration Police Arrests 36 Vietnamese and One Nigerian for Illegal Settlement
General Department of Immigration of Ministry of Interior, on Saturday, arrested 35 Nigerians and one Vietnamese for illegal settlement.
— Fresh News

Protesters urge Japan to end aid for Cambodia vote
Cambodian residents in Japan have rallied in central Tokyo to call on the Japanese government to end its support for a general election in July.
— NHK World