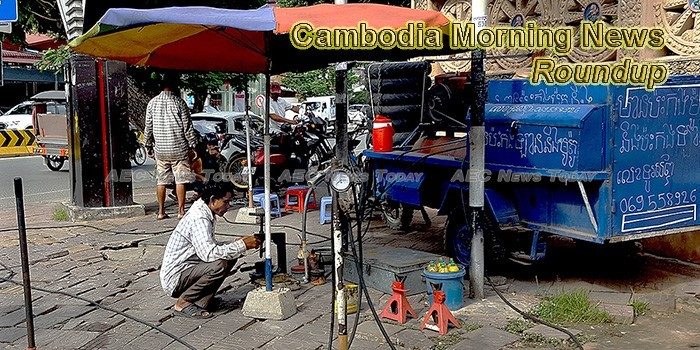 National Bank head calls on cops to bust 20 illicit lenders
The governor of Cambodia’s central bank has sent a letter to the National Police seeking legal action against more than 20 firms that are allegedly offering illegal loans.
— The Phnom Penh Post

Chinese State-Linked Hackers in Large Scale Operation to Monitor Cambodia’s Upcoming Elections, Report Says
The emails were believable. An interview request for a member of the opposition. An article sent to a government official. A conference invitation for a journalist. But each one a hacking attempt designed to lure the recipient.
— Time

Tourism industry unruffled by election – experts
Tourism officials and industry insiders say the upcoming election is not affecting the flow on tourists into the Kingdom.
— Khmer Times

China tips the scales away from the US in push for Cambodian influence
Beijing’s investment in Cambodia has been key to the country’s development, but some argue its domination is creating a quasi-colony and if ruler Hun Sen swings more towards Washington, it would benefit the people.
— South China Morning Post

CDC Grants Licenses to Four New Factories
The Council for the Development of Cambodia (CDC) granted licenses for companies to build four new factories in Cambodia, according to the CDC’s report on Monday.
— Fresh News

Cambodians Mourn Political Analyst Kem Ley on Anniversary of His Murder
Cambodians from various walks of life gathered on Tuesday to mark the second anniversary of the assassination of prominent political analyst Kem Ley, who was gunned down in the capital Phnom Penh days after publicly criticizing Prime Minister Hun Sen and his family for abuse of power.
— Radio Free Asia

Cambodian Immigration Police Arrests 17 Vietnamese and Nigerian for Illegal Settlement
General Department of Immigration of Ministry of Interior, on Tuesday, arrested one Nigerian and 16 Vietnamese, five female, for illegally settling and working in Phnom Penh’s Chamkarmorn and 7 Makara, according to Head of the Department of Investigation Ouk Hai Seila.
— Fresh News