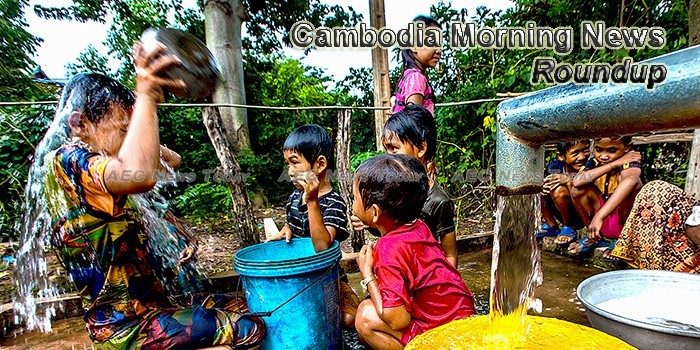 PM Hun Sen: UNTAC Did Not End Civil War in Cambodia, Win-Win Policy Did (video)
Prime Minister Hun Sen said that United Nations Transitional Authority in Cambodia (UNTAC) did not end the civil war in Cambodia and that the authority was unable to enter the areas controlled by Khmer Rouge Regime at Cambodia-Thailand borders.
— Fresh News (video)

Analysis: In new propaganda documentary, Hun Sen attempts to ‘rewrite history’
‘There is a miraculous story that I remember even now,” says Prime Minister Hun Sen, with a pause, in a glossy new documentary that aired in Cambodia on Wednesday night.
— The Phnom Penh Post

Cambodia to turn local noodle soup into household name
The Cambodian Ministry of Commerce plans to make Phnom Penh kuyteav, the famous noodle dish typically eaten for breakfast, into a brand name, with the official launch for the new trademark set for March, a senior official revealed to the Khmer Times.
— The Bangkok Post

NBC sees increased confidence in riel after dollar buys in 2017
The central bank injected $915 million worth of riel into the economy last year by buying up US dollars with the local currency, stabilising the exchange rate amid higher demand for riel, according to the bank’s latest report.
— The Phnom Penh Post

Garment factory shutters, leaving hundreds unpaid
Garment workers at the Benoh Apparel factory in the capital’s Meanchey district returned to work this week after a two-month suspension to find the building abandoned, prompting a protest demanding compensation from the government.
— The Phnom Penh Post

Cambodia’s Export to China Is Worth Over $600M
Within the eleven months of 2017, Cambodia has exported agricultural goods and other goods to China worth more than $633 million, while China exported to Cambodia more than $4 billion, according to the cam-control report of the Ministry of Commerce that Fresh News received today.
— Fresh News

Japan to Continue Electoral Aid to Cambodia, Despite US, EU Withdrawal
Japan will continue to provide electoral aid to Cambodia in the lead up to Senate elections next month and a general ballot in July, the country’s foreign ministry said Thursday, despite recent announcements by the U.S. and EU that they will withdraw their support amid restrictions on democracy.
— Radio Free Asia

Grant excludes HIV support group
A national network of people living with HIV, which has been key in helping coordinate anti-HIV services at the grassroots level, is now being excluded from a new Global Fund grant, raising “deep” concerns, according to NGOs and a leaked internal email sent to government officials.
— The Phnom Penh Post

Could Cambodia have been home to Asia’s ancient ‘Land of Gold’?
The location of the ancient realm of Suvarnabhumi is shrouded in mystery.
— The Phnom Penh Post