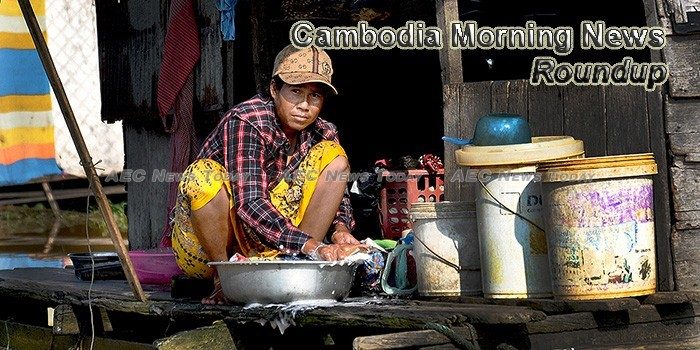 Cambodia: Opportunities For Improvement Abound, But…
Following its graduation from least developed country (LCD) to lower-middle income status in July 2016 the Cambodia economy has remained healthy. In 2017 Cambodia GDP growth came in at 6.9 per cent, driven by the tourism sector, an ongoing construction boom, and the gradual emergence of non-textile exports.
— AEC News Today

China Becomes the Top First Destination of Cambodia Rice Export
China has become the major Cambodian rice importer for the last three consecutive years from 2015-2017, according to the Statistics of the Secretariat of One Window Service for Rice Export Formality.
— Fresh News

International Pressure Continues as Cambodia Ramps up Crackdown on Democracy
International pressure continued to mount against Cambodia Tuesday as Prime Minister Hun Sen’s government proceeded with a crackdown on the country’s opposition ahead of a general election scheduled for July this year.
— Radio Free Asia

From Abroad, Firebrand Monk Continues to Oppose Government
Venerable But Buntenh has incurred the wrath of the government over the years for his stance on issues like corruption, land dispossession, and environmental degradation.
— VOA

Cambodia-Vietnam trade up 30 percent in 2017
Bilateral trade between Cambodia and Vietnam last year increased nearly 30 percent to about $3.8 billion according to Vietnamese state-run media, while Cambodia has yet to report trade statistics for most of 2017.
— The Phnom Penh Post

Indonesia to Send Observers to Monitor Elections in Cambodia
The Indonesian government has agreed to send its observers to monitor the 6th Mandate Election of Members of National Assembly in Cambodia, according to Prak Sokhonn, Senior Minister of Foreign Affairs and International Cooperation on Tuesday.
— Fresh News

Jailed Australian filmmaker Ricketson’s emails to Sam Rainsy probed
Emails sent to self-exiled former opposition leader Sam Rainsy have taken centre stage in the investigation against jailed Australian filmmaker James Ricketson, who was brought in for questioning this morning over correspondence that an investigating judge presented as evidence of “espionage”.
— The Phnom Penh Post

Phnom Penh: From Ghost City to SEA’s Tourist Destination, Says PM Hun Sen
After the liberation from Pol Pot’s Regime on January 7, 1979, I met approximately 70 people in Phnom Penh; however, there are over one million people settling in this capital city today, said Prime Minister Hun Sen on Tuesday.
— Fresh News