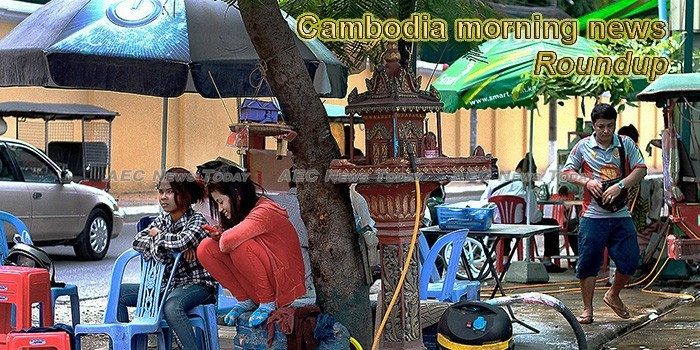 New airport car park opens tomorrow
Starting tomorrow, all vehicles accessing Phnom Penh International Airport will be welcomed by a new hi-tech parking lot, which has been designed to ease traffic congestion, according to an airport representative.
— Khmer Times

A thousand Cambodian labourers deported from Thailand
Some 1,000 Cambodian workers who failed to meet the deadline to legalise their work documents in Thailand have been deported since July 1, said officials at the Poipet border at Banteay Meanchey province.
— The Nation

Vietnamese businesses contribute to development of Cambodia
Vietnam has 206 investment projects in Cambodia, with a total registered investment of $3.02 billion. In the near future, economic cooperation will continue to be one of the most important driving forces for bilateral cooperation between two countries, writes the Economic, Trade Office of the Vietnamese Embassy to Cambodia.
— Khmer Times

Hopes for potato farming in Cambodia running high
After determining the best provinces in the country to grow potatoes, Cambodian scientists are now working to figure out what varieties adapt best to the local soil and will have the highest yields.
— Fresh Plaza

Disagreements and design flaws at Cambodia’s Khmer Rouge Tribunal
A recent consideration from the Extraordinary Chambers in the Courts of Cambodia (ECCC) has highlighted a fundamental flaw in its design, one which jeopardises the rights of the accused to appeal decisions made in their cases and renders the Pre-Trial Chamber, the chamber which hears motions and appeals against orders during the investigation phase of a case, ineffective.
— New Mandala

Cambodia: Civil Society Groups Call for the Release of Tep Vanny
Land activist and human rights defender Tep Vanny has been unjustly detained for two years as of today, for defending the rights of the Boeung Kak Lake community and her fellow Cambodians.
— Human Rights Watch

U.S. Embassy in Cambodia Invites Young Cambodians to Apply to the United States Service Academies
The Office of Defense Cooperation at the U.S. Embassy in Cambodia invited young Cambodians to compete for appointment to the United States Service Academies (U.S. Military Academy at West Point, U.S. Naval Academy at Annapolis, and U.S. Coast Guard Academy in New London) for the Class of 2023 for those students entering the academy July 2019.
— Fresh News

Kheng: Challenges ahead for new National Assembly
Interior Minister Sar Kheng again called on all leaders, civil servants and the national police to avoid partisanship, nepotism and abuse of power after the ruling Cambodian People’s Party (CPP) won an expected landslide victory in the national elections.
— The Phnom Penh Post

Tourism fairs to be held next month
Phnom Penh and Siem Reap will each host a tourism business fair next month, an expo that will serve as a platform for local and international businesses to connect and increase their networks.
— Khmer Times

The architect who dreamed of building a brighter Cambodia
When 35-year-old Hok Kang launched his career a decade ago, he wanted to change Cambodians’ perception of architecture and how it differs from engineering.
— Southeast Asia Globe

Appeal Court upholds drug traffickers’ prison sentences
The Appeal Court on Monday upheld guilty verdicts against four people who were sentenced to between 20 and 30 years in prison for drug trafficking in the capital.
— The Phnom Penh Post

New Thai IT firm says it has plans to enter Cambodian market
BBIX Thailand, a newly formed joint venture between two IT giants, plans to offer its services in Cambodia, Laos and Myanmar in the near future, according to a company representative.
— Khmer Times