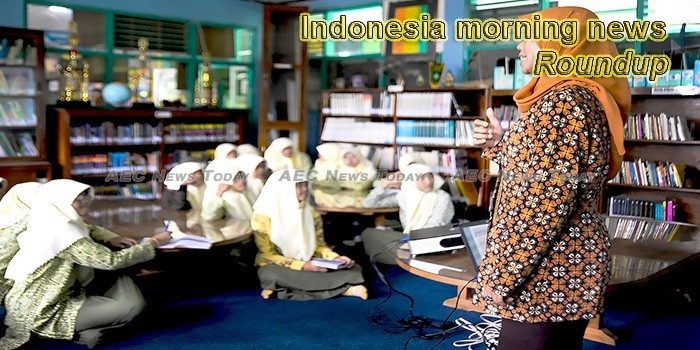 Mass burials to begin as Indonesia quake-tsunami toll tops 800
The death toll from Indonesia’s quake and tsunami disaster nearly doubled to 832 on Sunday (Sep 30) and was expected to rise further, prompting authorities to announce mass burials in a desperate attempt to stave off disease.
– Channel NewsAsia

Govt prepares rp560 billion for handling quake relief
The government had prepared Rp560 billion to provide relief, in response to the earthquake and tsunami that struck Central Sulawesi on Friday evening.
– Antara

Quake-triggered mudflow flattens Palu villages, thousands feared dead
A number of areas in Central Sulawesi have been hit by large amounts of mudflow following a 7.4-magnitude earthquake that jolted the province on Friday that also triggered a tsunami.
– The Jakarta Post

Riot breaks out at Donggala prison during earthquake
A riot has broken out at Donggala Penitentiary in Central Sulawesi after the warden reportedly refused to grant inmates’ request to leave the prison and look for family members affected by the earthquake and tsunami that struck the region on Friday.
– The Jakarta Post

Indonesia receives outpouring of condolences from world leaders
World leaders and prominent figures have sent messages of condolences to Indonesia in the aftermath of the large-scale destruction from a 7.4-magnitude earthquake and subsequent tsunami that rocked Central Sulawesi on Friday that cost hundreds of lives.
– The Jakarta Post

Warning system might have saved lives in Indonesian tsunami
An early warning system that might have prevented some deaths in the tsunami that hit an Indonesian island on Friday has been stalled in the testing phase for years.
– Associated Press via The Hamilton Spectator

The Latest: Indonesia leader: Rescuers having difficulties
Indonesian President Joko “Jokowi” Widodo says rescue teams are having difficulty recovering victims from the massive earthquake and tsunami because of a shortage of heavy equipment.
– New Zealand Herald

‘Bodies everywhere’: Indonesia rescue efforts focus on Palu
On Friday evening, Palu’s Talise beach had been heaving with people, gathered joyfully for the opening of the city’s Nomini music festival.
– The Guardian

5 Climbing Routes on Mount Merbabu Closed in October
All climbing routes in Mount Merbabu National Park will be temporarily closed on October 8 to 31.
– Tempo

Lazada and Realme Sign MoU as Both Strengthen Partnership to Win Young Indonesian Market
Today, Lazada, the leading e-commerce destination in Southeast Asia, signed an official MoU with Realme, the best balanced smartphone manufacturer, which integrates strong performance and stylish design, as well as affordable ‘technology and beauty’, as both strengthen their strategic partnership in Southeast Asia, where their phone is available to purchase exclusively through Lazada.
– AEC News Today/PRNewswire (media release)

How to win an election in Indonesia
Dozens of candidates convicted of graft are to run for office – and the country’s attitude towards kickbacks, which ranges from lax to supportive, means they have every chance of winning.
– South China Morning Post

Citilink to serve regular flights to three cities in China
Air transport between Indonesia and China is predicted to be brisker with fast growing number of Chinese tourists visiting the country.
– Antara

Freeport divestment to be completed by end of this year: Jokowi
President Joko “Jokowi” Widodo has expressed optimism that the transfer of the 51.23 percent stake in gold and copper miner PT Freeport Indonesia’s (PTFI) to state-owned mining holding company PT Indonesia Asahan Aluminium (Inalum) can be completed by the end of the year.
– The Jakarta Post