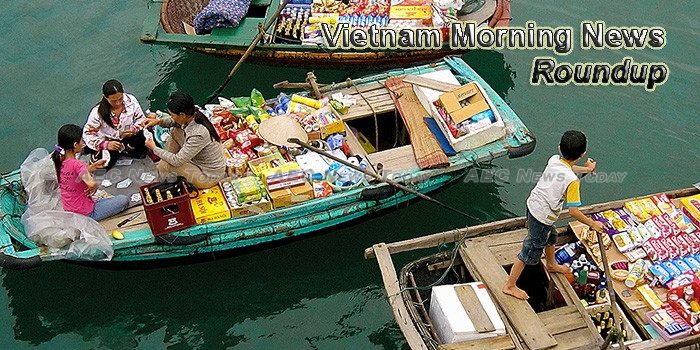 S’pore firms should ride on Vietnam’s rising growth
With the increased emphasis on internationalisation in Budget 2017 and uncertainty in the economic climate, it has become even more critical for Singapore companies to go global.
– Today

Banks to up capital by $1.6b
The banking system is expected to further develop this year, as 16 banks have announced plans to increase capital by a total of nearly VNĐ37 trillion (US$1.62 billion)
– Viet Nam News

Vietnam’s tax authorities to take closer look at foreign retailers
With tax avoidance among multi-nationals a growing global concern, Vietnam is keen to know what retailers are up to.
– VnExpress

Committees work to facilitate Vietnamese, Lao enterprises
Representatives from the Vietnam-Laos Cooperation Committee have worked with their counterparts from the Laos-Vietnam Cooperation Committee on the implementation of the Hanoi Agreement 2017 and the “one-stop-shop” customs model at the pair of Lao Bao-Densavan border gates.
– VietnamPlus

Co-processing, solution for industrial waste
Viet Nam is the third largest footwear maker in Asia and fourth in the world (behind China, India and Brazil), accounting for about 10 per cent of global production.
– VIETNAMNET Bridge

Vietnam sees six-fold rise in foreign workers since 2004
Officials are now looking into possible ways to collect social insurance payments from all of them.
– VnExpress

Vietnam plans to open ‘outstanding’ special economic zones
The country is becoming more selective in the kind of investment it seeks, giving greater priority to high-tech and green sectors.
– VnExpress