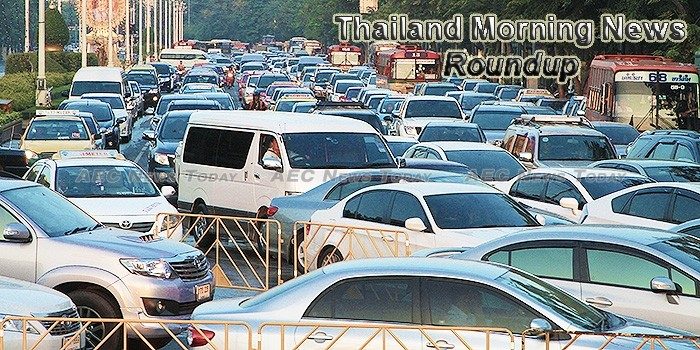 Thailand 2016 growth up but below junta target
Junta chief Prayut Chanocha says Thailand will be a developed country by 2036. Nearly three years into his coup the results are mixed.
– The Business Times

Bangkok Named Best City 2017
Bangkok has been named the “Best City” in Asia by readers of DestinAsian, a travel and lifestyle magazine in Asia-Pacific region with a print run of 33,414 copies and a readership of 100,242 per edition, according to a report from the Tourism Authority of Thailand.
– The Government Public Relations Department

Thailand pins growth hopes on massive investment along east coast
Worapol Tongpricha, a naval rear admiral dressed in a smart business suit, stands in the center of a sprawling former U.S. military base and marvels at its unlikely rehabilitation.
– Nikkei Asian Review

Somkid challenges shippers with 5% growth target
The government has set a lofty target of 5% export growth this year, well outstripping the projection of 2.9% by the National Economic and Social Development Board (NESDB).
– Bangkok Post

5-step entry exam plan for universities
High school students will be given five rounds to compete for university places next year under new changes to the entrance system aimed to ensure more equality among those vying for university seats.
– Bangkok Post

Gadfly Spurs Inquiry into No-Show Lawmakers’ Excuses
It will take until Friday to know whether seven absentee members of the parliament risk losing their jobs for not meeting attendance requirements – or up to three months for a newly launched review to run its course.
– Khaosod English

Russian tourist detained in Thailand for feeding fish, may face jail
A 53-year-old Russian woman has been arrested in Thailand’s Phuket Province and is awaiting a court hearing after she was caught feeding some bread to fish near ecologically sensitive coral reefs in the popular tourist destination.
– RT

TAT to lure Chinese tourists with military facilities
The Tourism Authority of Thailand has come up with an idea to open military facilities to draw tourists from China as part of a campaign to show Thailand’s new look, TAT deputy governor Srisuda Wanapinyosak said.
– Bangkok Post

SDF conducts 1st overseas drill in Thailand for protecting Japanese
Self-Defense Forces personnel conducted a drill in Thailand on Sunday for the protection of Japanese nationals abroard, a task made possible under Japan’s national security laws that came into force last year.
– The Japan Times

Thailand Water Pump Market Expected to Indicate US$ 25.6 Million by 2021
Persistence Market Research (PMR) in its recent report titled, “Thailand Market Study on Water Pump: Industrial Segment to Witness Highest Growth by 2021”, projects that the Thailand water pump market is expected to grow at a healthy CAGR of 6.3% during the forecast period.
– satPRnews