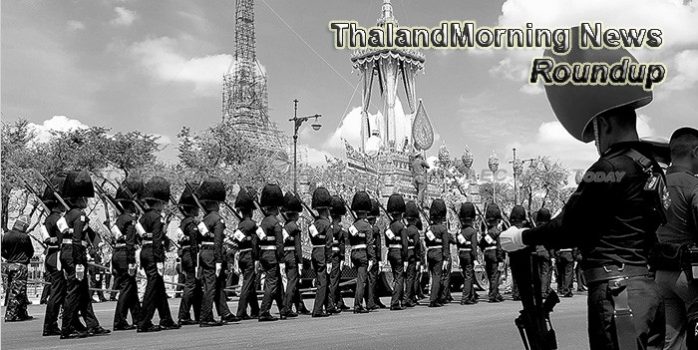 Prayut orders army to be prepared for flooding Oct 17-19
Prime Minister Prayut Chan-o-cha, in his capacity as chairman of the National Council for Peace and Order (NCPO), has instructed army chief Gen Chalermchai Sitthisad to order all regional army commanders to closely monitor the situation and get ready to help the people affected by floods, Maj Gen Piyapong Klinphan, a spokesman for the NCPO, said on Tuesday (Oct 17).
— Thai PBS

B57bn growth binge targeted for 2017-19
Thailand’s retail sector continues to thrive, with the Thailand Shopping Center Association (TSCA) predicting that 57 billion baht will be spent during 2017-19 on expansion.
— Bangkok Post

EU warns Thailand on N.Korea sanctions
Deputy Prime Minister Prawit Wongsuwon insisted Thailand has complied with United Nations Security Council resolutions regarding sanctions on North Korea, but it has not yet informed the UN of its actions.
— Bangkok Post

Hua Hin hit by deluge of rotten fish after rains
Villagers and tourists in the seaside town of Hua Hin were assaulted by the smell of rotten fish yesterday morning after hundreds of thousands of specimens died on a 10-kilometre stretch of beach tthere following torrential rains on Monday.
— Bangkok Post

Commerce Ministry explains why US pork imports not yet allowed
Thailand’s Ministry of Commerce has made it known that it has yet to amend pork import regulations, as requested by the United States, saying that, even though compelled by treaty, the change would first have to be thoroughly studied.
— NNT

Thai rice price up 15% this year on high demand
The Thai Rice Exporters Association has indicated a 15 percent increase in the average price of Thai rice this year due mainly to high demand among importers. ///
— NBT World (video)

Thailand, U.S. to form joint panel on trade, investment
The Thai Chamber of Commerce will set up a Thai-U.S. joint committee to drive trade between the two countries. The work of the committee will be an expansion of Thai-U.S. economic cooperation, following Prime Minister Prayut Chan-o-cha’s visit to the U.S.
— NNT

PM tests BMTA bus E-Ticket system
The Prime Minister has stated the government is seeking more ways to accommodate the public while testing an E-ticket for buses operated by the Bangkok Mass Transit Authority (BMTA).
— NNT

Hoteliers in Pattaya splashing out for EEC
The Eastern Economic Corridor (EEC) project and the expansion of U-tapao airport are set to create a hive of activity in Pattaya and the Eastern Seaboard, prompting hoteliers to revamp as several new players open their doors in the coming years.
— Bangkok Post

Major businesses to be out of service on late King’s cremation day
Stores, cinemas, post office, banks and stock market have announced a day-off on the King Bhumibol’s cremation day so that their employees can join the historic event.
— Prachatai English

What’s driving Bangkok’s growing co-working industry?
From cost, location, a place to grab some shut-eye, eat a snack or even build a community, the factors behind the popularity of the capital’s shared work spaces are as sundry as they are surprising
— Bangkok Post