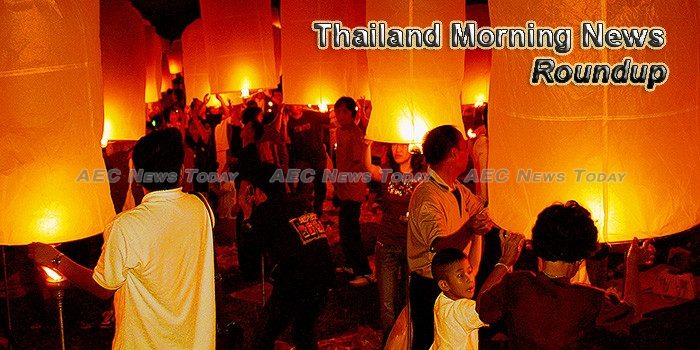 Computer Graphics Experts to Gather in Bangkok For SIGGRAPH Asia 2017
More than 7,000 people from some 60 countries are expected to gather in Bangkok later this month when some of the the world’s leading developers, academics, and creative minds in the fields of computer graphics and interactive techniques get together for the 10th SIGGRAPH Asia conference and exhibition
— AEC News Today

RCEP pact set for leaders’ talks
The next step for the Regional Comprehensive Economic Partnership (RCEP) will be discussed at the leaders’ meeting on the sidelines of the Asean Summit in Manila.
— Bangkok Post

PM orders urgent survey of damage to help flood-stricken people
Prime Minister Prayut Chan-o-cha has instructed all provinces to ensure the flood-affected people of assistance from the government and urgently help them after the floods subside.
— NNT

Redflow aims to produce 3000 batteries per month in Thailand
Australian battery company Redflow has set a target of 3000 batteries a year to be produced by its new Thai factory, which it is currently fitting out.
— IT Wire

Dow to apply Thai experience in its Myanmar operations
AS Dow Water & Process Solutions brings its international water treatment solutions to Myanmar, the firm plans to leverage its experience working with partners in Thailand over many years and apply it in the neighbouring country.
— The Nation

Pakistan-Thailand FTA negotiations on 6th
The 9th round of Free Trade Agreement (FTA) negotiation between Pakistan and Thailand will held from November 6-8, in which both sides would present complete offer list of FTA , for reaching the final agreement.
— The Nation

Thai firm to run Lao port on Mekong
Chiang Rai: Laos is poised to launch a new port checkpoint in the Mekong River early next year to handle regional traffic while a Thai firm has won a contract to develop and operate the port for a period of 40 years.
— Bangkok Post

‘Find right markets’ before hiking organic rice output
THE GOVERNMENT has to find the right market for organic rice before it encourages farmers to increase the area producing the crop from 300,000 rai (48,000 hectares) this year to 1 million rai in 2019, Thai Rice Exporters Association president Pol Lieute-nant Charoen Leothamatas said.
— The Nation

TACS believes Thailand is no. 1 in ASEAN in terms of plastic surgery
Thailand is the top dog of the cosmetic industry in the ASEAN region, the Thai Association and Academy of Cosmetic Surgery and Medicine (TACS) claims.
— NNT

CNN names Northeast as top world destination in 2017
Thailand’s northeastern region has been named by CNN as one of the world’s top 17 places to visit this year.
— NNT