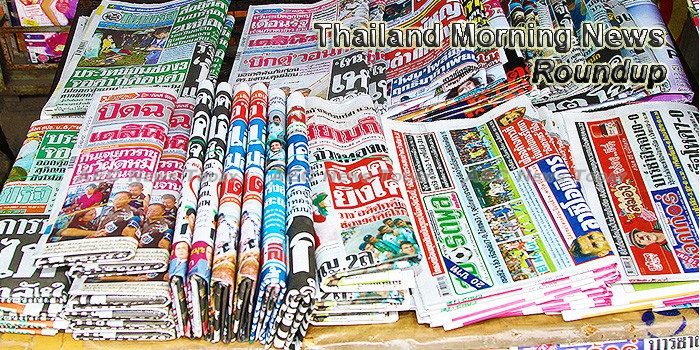 Military admits keeping dead cadet’s innards for medical examination
The armed forces admitted this afternoon (Tuesday) that they keep some of the innards of the dead cadet which include his heart, brain and stomach at hospital for further examination to determine the actual cause of his death.
— Thai PBS

Thailand eyes improvement in global competitiveness ranking
Thailand’s Ministry of Commerce and the Office of the National Economic and Social Development Board (NESDB) have met with representatives from the World Economic Forum (WEF) to find ways to improve Thailand’s economic competitiveness.
— NNT

NESDB forecasts 3 9% growth in 2017 economy
The Office of the National Economic and Social Development Board (NESDB) has forecast that Thailand’s 2017 economy will expand by 3.9% and will continue its growth momentum into next year.
— NBT world (video)

Petchburi warned of impending flood
Thailand’s Deputy Director-General of the Royal Irrigation Department (RID) has warned people living along the Petchburi River, in Muang district of Petchburi province, that they should prepare for overflow tomorrow evening after heavy rains in Kaeng Krachan district.
— NNT

Ministers rumored to be removed in new Cabinet line-up unworried about reshuffle
Cabinet ministers, who have been rumored to be among those likely to be removed from office when a new line-up is installed, have voiced no concerns and affirmed their respect for the Prime Minister’s final decision.
— NNT

TV association requests aid measures for a third time
The Digital TV Operators Association has doubled down on pressuring the government to overhaul the country’s broadcasting industry, which they say is facing impending disaster.
— Bangkok Post

BGF Glass commences production at Bt5-bn plant
BGF Glass, a unit of listed company Bangkok Glass, on Tuesday commenced operations at its first factory, BGF Kabinburi, which has a production capacity of 219,000 tonnes of float-glass panels per year.
— The Nation

Arrest warrants sought for 12 individuals for match-fixing in Thai League games
The Football Association of Thailand (FAT) today (Nov 21) sought warrants from the Criminal Court to arrest 12 people in the football business for alleged match-fixing in the Thai Premier League competitions.
— Thai PBS