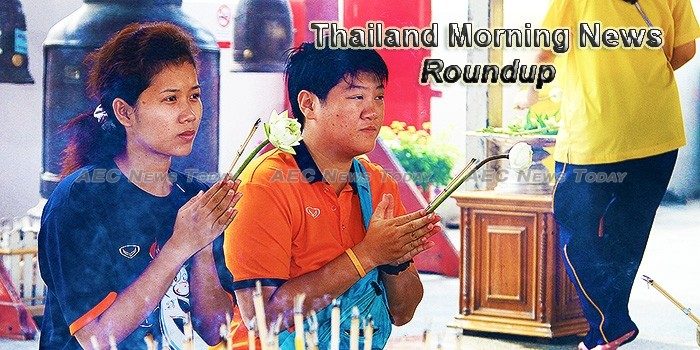 Sink or Swim: Bangkok Might Be Underwater by 2032
The future is looking dire for Bangkok as the city continues to sink and sea levels continue to rise.
– Saigoneer

Thai Border Trade Tops $1.1b
Cross-border trade with Thailand exceeded US$1.13 billion this financial year until February 17, according to the Ministry of Commerce.
— Consult-Myanmar

Booking.com, Bangkok Airways join hands
BANGKOK Airways has announced a partnership with Booking.com to connect travellers with a wide selection of places to stay through the airline’s website.
— The Nation

Cambodians, Speaking Out Against Thai Slave Labor, Seek Justice in United States
Thailand’s seafood industry has supplied the global market with about $7 billion dollars annually. Half of that is shrimp products destined for supermarkets in the US, Europe, and Japan.
— VOA

Thailand Wealth Management Forum 2017
We are delighted to host our 6th annual event for the wealth management community in Thailand.
— Hubbis

Vietnam, Thailand enjoy growing friendship
At a reception for the group’s Chairman Sakchai Tanaboonchai in Hanoi on March 8, the NA Vice Chairman took note of the sound cooperation between Vietnamese and Thai legislative bodies, particularly at key forums, such as the Inter-Parliamentary Union and the ASEAN Inter-Parliamentary Assembly.
— VietNamNet Bridge

Minister under fire
FINANCE MINISTER Apisak Tantivorawong may find himself in trouble if he fails to recover taxes from the family of former premier Thaksin Shinawatra, the chairman of the State Audit Commission Chaisit Trachoetham told The Nation yesterday.
— The Nation

Survey shows women vulnerable to sexual crimes on public transport
A SURVEY has revealed shocking findings – about 2 per cent of female public-transport passengers have been sexually assaulted or raped.
— The Nation

Dhammakaya deputy abbot stripped of his title
A Royal Command was announced on Wednesday stripping Phra Ratchapawanajarn or Phra Thattachivo, deputy abbot of Wat Dhammakaya, of his title effective as of March 7.
– Thai PBS