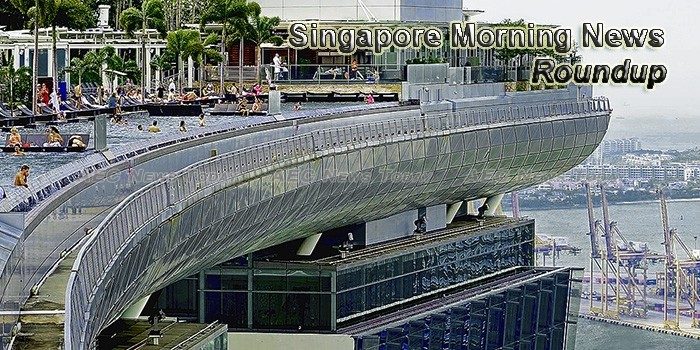 Singapore Property Developers Have a New Headache
Singapore’s recent unwinding of some property curbs, which initially appeared to boost prospects for developers, may instead be creating new problems.
— Bloomberg

People in Singapore spend over 12 hours on gadgets daily: Survey
Singapore consumers polled spend most of their waking hours using gadgets, with positive and negative effects
— The Straits Times

Singapore blocks visas for Indian IT professionals
While the focus has been on the US, visas for IT professionals to work in Singapore have dropped “to a trickle”, prompting the government to put on hold the review of the Comprehensive Economic Cooperation Agreement (CECA) citing violation of the trade pact.
— The Times of India

Singapore is not Immune from Potential Unemployment Hardships
Technological advancements has created new jobs. However, there is a job mismatch. Fresh graduates are likely to hold out against taking on initial offers from prospective employers due to a variety of reasons. For instance, job seekers may not be fully trained for that particular role and apprehension sets in. Coupled with low starting salaries due to foreign competition, job seekers would then likely adopt a wait and see attitude. Hence, the conundrum.
— The Independent

Minimum pay to go up for Pinoy maids in Singapore
According to the Singapore-based The Straits Times, the minimum salary for Filipino domestic helpers will be increased to S$570 starting May 1 to keep pace with exchange rate fluctuations.
— ABS CBN News

Singapore Market May See Renewed Selling Pressure
The Singapore stock market bounced higher again on Friday, one session after it had ended the two-day winning streak in which it had advanced almost 60 points or 1.9 percent. The Straits Times Index now rests just above the 3,175-point plateau, although the market may head south again on Monday.
— RTT News

Singapore’s Brave to Battle Chinese Bosses
After seeing investors in Singapore duped for years by misbehaving bosses, the city’s stock exchange is taking its fight for justice to mainland China, an exemplar of egregious corporate behavior in the post-Enron world.
— Bloomberg

Singapore shipping industry boosts efforts to meet emissions goals
Singapore’s maritime industry is stepping up efforts to reduce the environmental impact of shipping and related activities, ahead of the 2020 target that the International Maritime Organisation (IMO) has set for a 0.5 per cent global cap on sulphur emissions from marine fuels, from the current 3.5 per cent limit.
— Hellenic Shipping News

Singapore gets tough to meet environment goals
SINGAPORE is set to introduce a series of new regulations in a bid to speed up progress towards the city-state’s environment commitments.
— Carbon News

Man arrested over Hougang station security scare
For the first time since the launch of the SGSecure movement to prepare Singaporeans for any terror attack, an unattended suitcase caused a security scare, leading to the closure of Hougang MRT Station for more than an hour yesterday.
— Today Online

Job security becoming less important for Singaporean millennials
Although salary has been consistently ranked as the most important factor especially for millennials in Singapore, a Randstad study revealed that the importance of job security and financial health of the organisation has fallen more and more compared to five years ago.
— Singapore Business Review