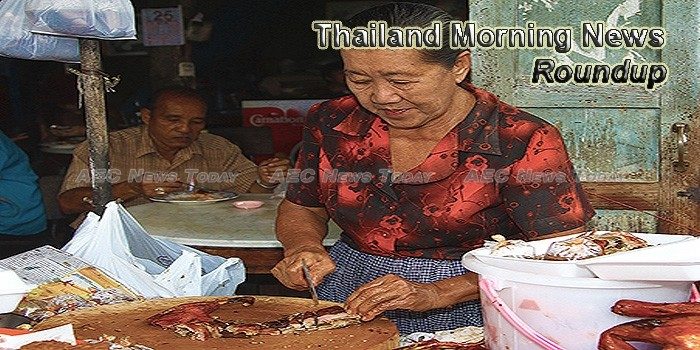 Thai exports slide 2.76% in value on year in February
EXPORTS in February decreased in value year on year for the first time in four months, a decline attributed to the high value of gold and aerospace exports in February 2016, according to the Commerce Ministry.
— The Nation

The plague and promise of Thai rice
ur decades ago the Buddhist monk Luang Paw Nan launched a campaign in Thailand’s Surin province to reduce poverty among farmers by encouraging them to grow organic jasmine rice, the fragrant variety of the staple grain that grows primarily in the country’s northeastern region, known locally as Isan.
— Southeast Asia

TABLE-Thailand’s main exports, markets in February
BANGKOK, March 22 Thailand’s customs-cleared exports in February dropped a less-than-expected 2.8 percent from the same month of 2016, which had high figures, the commerce ministry said on Wednesday.
— Reuters

Exports take a drop in February
The value of Thai exports fell for the first time in four months in February to UScopy8.47 billion, down 2.8% year-on-year, on lack of gold and aircraft-related products, the Commerce Ministry said.
— Bangkok Post

CARRIERS FACE GROUNDING
About five Thai-registered airlines could be grounded if they do not get a new Air Operator Certificate by July 1. However, the impact is expected to be minimal since these airlines are mainly operators of chartered flights and domestic aviation services. Thailand has
— The Nation

Security elevated in Thailand following London terror attack
Police have intensified security measures following the terror attack in London in which five people were killed and at least 40 injured.
— The Nation

Board of Trade and TCC get new chairman
Members of the Board of Trade of Thailand and the Thai Chamber of Commerce yesterday appointed Kalin Sarasin as the bodies’ new chairman, their 24th. Prior to the appointment, he was vice chairman of the two organisations.
— The Nation

Amended land tax bill attacked
THE NEW Land and buildings tax will fail to narrow the wealth gap between the haves and have-nots, according to a prominent economist.
— The Nation

Rules for the ride-hailing revolution in Thailand
I’m glad that Uber and the Transport Ministry will jointly study ways of legalising car-hailing services.
— The Nation

Duterte, Prayut agree on South China Sea
Thailand and the Philippines have agreed to emphasise freedom of navigation in the disputed South China Sea as a core value in securing peace and prosperity in the region.
— Myanmar Times

The new ‘Phuket Street Food’ app is out, and it’s pretty good
The Ministry of Foreign Affairs, in cooperation with Thailand Foundation, has launched a new mobile application for Thai street food, aimed at assembling information on all of the country’s top roadside eateries.
— The Phuket News

Most workers want a new job: survey
Most Thai employees are looking for a new job, a survey by JobThai.com has revealed.
— The Nation