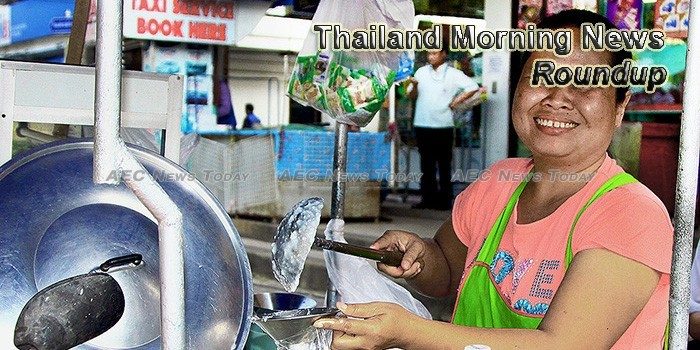 ADB, Escap raise GDP outlook
Asian Development Bank (ADB) yesterday hiked its forecast for Thai GDP growth to 3.8% this year and next, while the UN Economic and Social Commission for Asia and the Pacific (Escap) upgraded its 2017 estimate to 3.5% and raised its 2018 view to 3.4%.
— Bangkok Post

Cabinet approves 1.68 billion baht for reduction of off season rice fields
The Cabinet has approved a new budget to help the country reduce the expanse of land dedicated to off-season rice growing.
— News Today (video)

Three held after B50m rhino horn bust
Police have arrested three suspects, including a Department of Agriculture official, for allegedly conspiring to smuggle 14 rhino horns, worth about 50 million baht, from South Africa to Thailand.
— Bangkok Post

PM promises villagers he will consider staying in power longer
FOR THE FIRST TIME in more than three years, Prime Minister Prayut Chan-o-cha yesterday positively responded to a request for him to extend his stay in office during his visit to the northeastern province of Kalasin.
— The Nation (annoying popups)

CPRAM to expand production capacity under food innovation push
CPRAM Co Ltd, a ready-to-eat food producer and distributor, yesterday announced a five-year strategic vision under which it will boost production capacity and promote sustainability.
— The Nation

Labor Min to review proposed revision of migrant labor law
The Ministry of Labor has accepted a petition from the private sector for an amendment to the new law on migrant workers, of which punishment clause is claimed to be too harsh.
— NNT

Drive for mega-projects
THE government will push forward with clearing the way for a start on some infrastructure mega-projects before the end of this year, Deputy Prime Minister Somkid Jatusripitak said yesterday.
— The Nation

CPF sharpens focus abroad for growth
THE head of Charoen Pokphand Foods’ (CPF) agro industrial business says the food giant has little room left to grow in Thailand as the industry is “fully saturated” and expansion must now come from overseas markets.
— The Nation

Phuket officials target deadly overloaded trucks
Officials from the Phuket office of the Department of Rural Roads (DRR) today (Dec 13) set up a weigh station checkpoint at an intersection where a 31-year-old woman was killed and her 3-year-old son left injured by an overloaded cement truck in August.
— The Phuket News

China urges utilisation of LMC scheme for boost to agriculture sector
CHINA sees an imbalance in the agriculture development among the six countries in the Mekong basin and would push for utilisation of the Lancang-Mekong Cooperation (LMC) scheme to unlock its potential, a Chinese senior official said.
— The Nation

Govt helps low-income people start small franchise businesses
The Ministry of Commerce has launched a project to create jobs for low-income people with the help of more than 40 franchises. The state-run Government Savings Bank (GSB) will provide financial assistance for them.
— NNT

Home-grown robot to keep our beaches clean
The country’s first domestically-built beach-cleaning robot has been developed to join humans in the task of keeping Thailand’s scenic beaches clean and pollution-free.
— The Nation

Taxi OK service launch put off until January
The Department of Land Transport (DLT) has put off its scheduled “Taxi OK” service from the end of this year to January next year.
— Thai PBS

PM assures election to be held under roadmap
Prime Minister Prayut Chan-o-cha yesterday (Dec 12) reiterated Thailand’s commitment to hold election under its roadmap after the European Union decided to resume political contacts at all levels with Thailand.
— Thai PBS

Govt hemp farms start operations on January 1
STARTING ON January 1, government agencies will be allowed to grow hemp in six provinces as a part of ongoing efforts to treat the plant as an economic crop.
— The Nation (annoying popups)

‘Blade runner’ legs give maimed Thai dog new lease on life
Just over a year after he was maimed for gnawing on someone’s shoes, Cola is romping across a beach on new sleek paws: curved “blade runner” prosthetics modelled on those used by Paralympian sprinters.
— Channel NewsAsia

Man faces arrest after committing arson, broadcasting it live on Facebook
Police are gathering evidence against a man who on Dec 9 set fire to a house in Khaen Dong district in Buri Ram province and broadcast live the illegal action he committed on Facebook.
— Thai PBS

Cancer patient sues wife for embezzling his B9m donation fund
A 24-year-old man who suffered from nasal cavity cancer has sued his wife for alleged embezzlement and misusing about 10 million baht money people donated for his medical treatment.
— Thai PBS