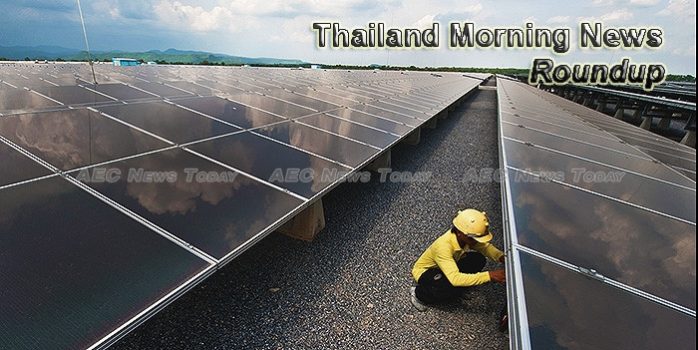 Far-reaching changes afoot for excise tax
Organic laws concerning the new excise tax rates, which will apply to all products subject to excise duties except for alcohol and cigarettes, will top the cabinet’s agenda this week.
— Bangkok Post

Southern violence moving further north. Former Minister recommends martial law in Songkhla
In the aftermath of a truck robbery in which one hostage and one suspect were killed, officials are now floating the idea of reintroducing martial law in the southern provinces – specifically districts in Songkhla.
— Phuket Gazette

Helping Hand Package to Startups
A REGULATORY “sandbox” for experimental undertakings is among measures the Finance Ministry is introducing to help startups succeed.
— The Nation (annoying popups)

Thailand Ramps up Bid To Lure Tech Startups (video)
From its northernmost tip to its’ southernmost provinces the buzzword that everyone in Thailand is hearing at the moment is ‘Thailand 4.0’ – and the message that is being relayed is that the Kingdom’s future depends on the development of a more educated, technologically-adept workforce.
— AEC News Today (video)

Private sector pitches in to realise Thailand 4.0
THE Ministry of Education has signed a memorandum of understanding with Big C Super Center Plc to conduct training activities for 5,000 vocational students in the four subjects of logistics, public relations, marketing and accounting throughout its 100 branches.
— The Nation (annoying popups)

Govt to offer incentives to port investors
Authorities are seeking approval from Deputy Prime Minister Somkid Jatusripitak for a new benefit-sharing arrangement between state and private sectors to give four river and sea ports shunned by investors a new lease on life.
— Bangkok Post

AUTO e-License for transfer of Industrial Waste
Getting rid of industrial waste can be quite a task for businesses, especially with paper work and filings that can take up 30 days to process before a certificate is issued just to transfer the waste out of the factory; now it takes only 3 minutes.
— NBT World (video)

Air force plans to put armed marshals on planes
Amid concerns about terrorist attacks which have recently wreaked havoc in many parts of the world, the Royal Thai Air Force (RTAF) has rolled out a training session to produce air marshals to be deployed with weapons on commercial airplanes.
— Bangkok Post

AG launches probe into rice bid-rigging complaints
The Attorney General has allayed the worries of rice bidders, saying the probe into the alleged fixing of this year’s first rice auction is ongoing.
— NBT World (video)

Developers sweeten pot for buyers
Developers are offering free or low monthly instalments for up to three years to speed clearance of ready-to-transfer condominiums and to cushion against high rejection rates for housing loans.
— Bangkok Post

Education minister puts focus on teacher training in overhaul of system
EDUCATION Minister Teerakiat Jareonsettasin has focused on “knowledge quality” of teachers and students as priorities in the ongoing education reform.
— The Nation (annoying popups)

Hilarious! Watch How Some Thais React to Needles (video)
Any notion that Thais are a race of fearless warriors goes straight out the window in this social media video composition of Thais receiving vaccines, and giving blood samples; with the reactions of some to needles making for hysterical viewing.
— AEC News Today (video)

Watch: Thai Tourists Trample Yellowstone’s Hot Springs (video) (Updated)
Belligerent. Noisy. Rude. These are some of the accusations that are often levelled at tourists from the People’s Republic of China (PRC) – particularly by Thais where some nine million, or about a quarter of all forecast 2017 inbound arrivals, are expected to visit this year.
— AEC News Today (video)

Army chief to head a meeting on Monday to discuss security for Aug 25
Army Commander-in-Chief General Chalermchai Sitthisart, in his capacity as secretary-general of the National Council for Peace and Order, will hold a meeting with officials in charge of security affairs on Monday (Aug 21) to discuss security measures for Aug 25 when the Supreme Court’s Criminal Division for Holders of Political Offices is due to deliver verdicts on rice pledging case and on G-to-G rice deal.
— Thai PBS

Defence to appeal Koh Tao verdicts
The defence in a case where two Myanmar nationals were convicted of the brutal murders of two British backpackers in Koh Tao in September 2014, will file their final appeal with the Supreme Court Monday.
— Bangkok Post

Mushroom seeks B1bn intake
Mushroom Television projects revenue to reach 1 billion baht a year within the next four or five years, thanks to strong growth in digital media.
— Bangkok Post

Bangkok to become regional hub
India-based Jet Airways’ business strategy in 2018 will focus on Asia with a plan to open more new routes in the region, including in Thailand.
— The Nation (annoying popups)

SCG deal boosts Vietnamese pitch
SIAM Cement Group (SCG) yesterday confirmed it will join with state enterprise PetroVietnam in a US$5.4 billion petrochemical project, just as the Vietnamese prime minister was inviting Thai investors to be strategic partners in his country’s liberalisation of the economy.
— The Nation (annoying popups)