Thailand morning news for May 22 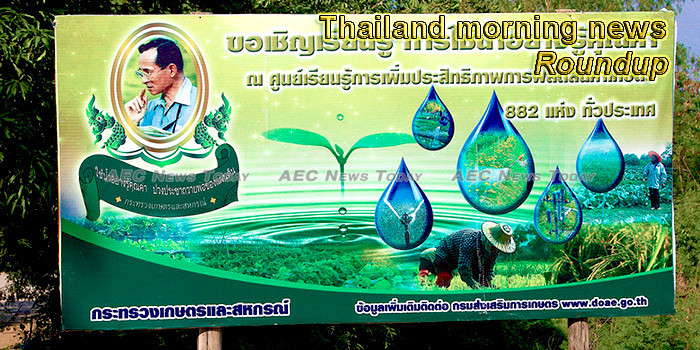 Planning unit cuts growth forecast
The government’s planning unit has lowered its full-year GDP growth forecast to 3.3-3.8% from 3.5-4.5% after the economy grew at its slowest pace in more than four years in the first quarter.
— Bangkok Post

Bhumjaithai to join a coalition but only if its “free kanja” policy is accepted
Bhumjaithai party leader Anutin Charnvirakul has made clear that his party will join the coalition that commands the majority in the House of Representatives but on the condition that the alliance accepts the party’s policy to legalize cannabis (kanja) and its products.
— Thai PBS News

Ganja amnesty finds 10% have valid cause
About one in 10 of the 20,000 people who registered as being in the illegal possession of cannabis to treat medical ailments were found to have diseases that justified the use of the narcotic, the Food and Drug Administration (FDA) announced on Tuesday.
— Bangkok Post

Regime is here to stay
In the aftermath of the March 24 general election, horse trading for cabinet seats among politicians has been ongoing as the two opposing camps make last-ditch efforts to form a coalition government.
— Bangkok Post

Thanathorn faces fresh legal challenge over ‘loan’
The Election Commission (EC) has been asked to act against Future Forward Party (FFP) leader Thanathorn Juangroongruangkit for yet another controversy in connection with a 110-million-baht loan he allegedly gave to the party wrongfully.
— Bangkok Post

Warns against dengue fever
Thailand’s Ministry of Public Health (MOPH) is asking parents and teachers to eliminate breeding grounds of the Aedes larvae at houses and schools to prevent dengue fever from spreading during the new school term after it was found that, in the first five months of this year, there were more than 20,000 dengue fever patients and more than half of them are students.
— NBT World (video)

FDA will not extend marijuana amnesty deadline
Today is the last day for people who possess marijuana for medical purposes to register for amnesty with the authorities, as the Food and Drug Administration (FDA) has announced that the registration period will not be extended.
— NBT World (video)

Reduce social disparity and increase access to state services
Elderly care is one of the various activities that the SBPAC has driven to promote the rights and efficiency of the elderly in the area by joining with religious leaders and Ponao elderly institution as it is an educational institution that people of retirement age choose to study and live to learn how to read Quran, listen to the doctrine and behave according to religious principles.
— NBT World (video)

Police seize haul of weapons, drugs in post-Songkran blitz
Police Region 8 yesterday put on display 193 firearms as well as more than 310,000 meth pills and more than 2.3kg of crystal meth, all seized in a post-Songkran anti-crime blitz from April 20-30 and May 11-19.
— The Phuket News

Pheu Thai turns to Thaksin’s son to woo Democrats and Bhumjaithai
With time running out, and desperate to form a majority pro-democracy government, the Pheu Thai party has resorted to enlisting the help of Mr. Panthongtae Shinawatra, the only son of…
— Thai PBS News

Scot who helped put 3 on Thai death row accused of selling women into sex
A Pattaya police volunteer from Scotland whose testimony helped send three people to death row is now wanted in Thailand on allegations he sold women into the flesh trade.
— Coconuts (paywall)

First palm oil purchase contract to be signed tomorrow
The Electricity Generating Authority of Thailand is signing the first purchase contract among those for a total of 200,000 tons of palm oil for use in the production of electricity tomorrow. Such purchases will raise the raw palm price by three baht per kilogram in favor of palm growers.
— NNT

Neglect blamed for broken Najomtien sewage pumps
Broken pumps caused the sewage spill that blackened a Sattahip District beach, Najomtien officials said. The filter is part of a 124-million-baht project built by the subdistrict to connect its sewer lines to Pattaya’s waste-processing plants. But the system was neglected for a year and broke
— Pattaya Mail

Q1 GDP growth falls to weakest in more than 4 years, outlook murky
Thailand’s economy grew at its slowest pace in more than four years in the first quarter, and by less than expected, thanks to a drop in exports and public investment.
— Bangkok Post

YC-backed dahmakan raises US$5M to roll out its chef-cooked food delivery in Thailand, Malaysia
By vertically integrating the entire value chain from food production to delivery, its mission is to make food delivery affordable for office workers dahmakan, a Y-Combinator-backed cloud kitchen startup in Malaysia, today announced the closing of over US$5 million in Series A round of funding with …
— e27

2019 SeaWeb Seafood Summit agenda features Thailand field trips, new session formats
A diverse group of seafood sustainability advocates, leaders, and stakeholders will convene in Bangkok, Thailand next month for the 15th edition of the SeaWeb Seafood Summit, for what promises to be the most experiential iteration of the event yet, according to conference organizer Diversified Communications.
— Seafood Source

Water situation at Na Jomtien Beach improving
Following the discharge of wastewater into the sea at Na Jomtien Beach in Sattahip district, Chon Buri province, the situation has started to return to normal, with the water level rising and the stench subsiding, as the local municipality considers closing the sluice gate.
— NNT

Thailand leads ASEAN to discuss FTA with China
The trade war between China and the United States has led to an increased US import tax of 25 percent which affects global trade and Thai exports to the US. The Ministry of Commerce has devised a solution to the problem by seeking enhanced cooperation between ASEAN and China.
— NNT

Minister to push for two more Mekong bridges
The Transport Ministry will push for a 4-billion-baht investment in two new bridges over the Mekong River linking Thailand with Laos.
— Bangkok Post

‘I Fought, I Lost’ : 5 Activists Reflect on 5 Years of Junta Rule
Wednesday marks the fifth anniversary of the May 22, 2014 military coup that brought current junta leader Prayuth Chan-ocha to power.
— Khaosod English

5G: Welcome to instant wi-fi and the internet-of-everything
5G will change everything. What 2, 3 and 4G have improved on, 5G will revolutionise and open up even more online possibilities.
— The Thaiger

New megamall to occupy 400 rai at Klong Toey port
The Port Authority of Thailand (PAT) said it only plans to use about half of a 900-rai area at Klong Toey port, and hand the rest over to a real-estate project to facilitate a new landmark by the Chao Phraya River.
— Bangkok Post property

Thailand, Taiwan to hold “Two Wheels Asia 2019”
Thailand and Taiwan are jointly organizing “Two Wheels Asia 2019”, an international exhibition and conference of the motorcycle, electric bike and bicycle industry. The event is aimed at promoting Thailand’s industrial sector and strengthening the country’s competitiveness in the global market.
— NNT

Hundreds start 256km walk to support medical marijuana
About 1,000 people started a long walk from Phichit province to Suphan Buri province on Tuesday to raise funds for research and development into medical applications for marijuana — and to call for the general public’s right to grow it as a medical herb.
— Bangkok Post

Has Michelin Ruined ‘Modern’ Thai Food? Laureates Weigh In.
Instagrammables, fancy plating, Michelin stars – some see them as marketing tricks that standardize the Thai food scene, others as a classy boon to uplift and update the country’s culinary heritage. Thai chefs, farang restaurant proprietors, and a food expert diverged in views on …
— Khaosod English

Ramps give disabled easy access to trains
After having been in service for nearly nine years, the Airport Rail Link has finally begun using portable wheelchair ramps to help disabled people board and alight from its trains.
— Bangkok Post

Coronation Day Designated as New Holiday
The government on Tuesday announced May 4 as a public holiday to honor His Majesty the King’s formal coronation, bringing the total number of holidays to 19.
— Khaosod English

Toon Bodyslam to Run for Isaan Hospitals
The rock star behind a charity run that raised over a billion baht for hospitals in 2017 will return for a new fundraising campaign in the northeast, organizers said Monday.
— Khaosod English

Ministry of Commerce expands palm oil, rubber markets to India
The Ministry of Commerce has led a delegation to penetrate the export markets for lowered-priced rubber and palm oil to India which has over a billion population and all levels of consumers. A major Indian tire manufacturers has assured to buy Thai rubber products within this year.
— NNT

Phoenix goes up for auction, starting price 900,000 baht
The notorious and ill-fated tour boat Phoenix, which sank off Phuket last July killing 47 Chinese tourists, is among 48 items that the Anti-Money Laundering Office will auction off this Wednesday at its head office.
— The Thaiger

Swashbuckling Version of Twelfth Night to Invade Bangkok Stage
A Shakespearean comedy is coming to New Phetchaburi Road – but with a swashbuckling twist. The Bangkok Community Theatre is putting on an 18th-century pirate version of Shakespeare’s “Twelfth Night”, directed by Ethan Oulton and featuring an expat and Thai cast.
— Khaosod English

Gov’t to Amend ‘Anti-Buddhist’ National Anthem MV
The government on Tuesday said the national anthem’s official music video will be edited to comply with complaints from a Buddhist group.
— Khaosod English

Man threatens suicide over soldier’s ‘adultery’ with wife
A 66-year-old man put a cutter to his throat in a bid to seek justice from Prime Minister Prayut Chan-o-cha over the conduct of a soldier based in Roi Et who allegedly committed adultery with his wife. Police later overpowered the man.
— Bangkok Post