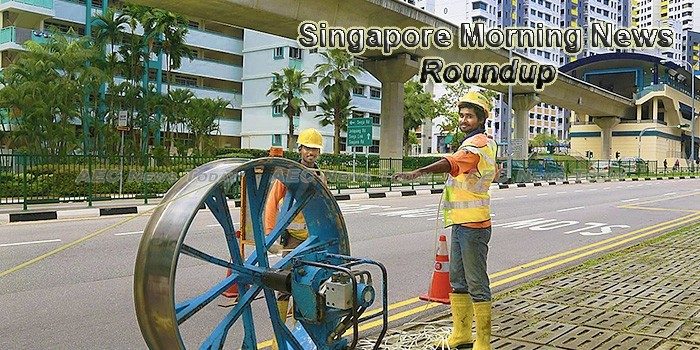 Singapore deals up by 34% in 2016
The value of Singapore investment deals struck last year – including both those made here and overseas – has shot up.
— The Straits Times

Silicon Valley adtech startup taps ex-Twitter exec to open first Asia office in Singapore
Not only is Asia mobile-first, it’s also expanding at a rate faster than any other region in the world. It’s because of this dynamic that nearly a quarter of the region’s total media advertisement spending will be set aside for mobile marketing channels.
— Tech In Asia

Singapore Tightens Rules for Sharing Economy that Could Disrupt Asia Ambitions
Singapore, a keen early adopter of the sharing economy, has fired a warning shot across the bow of Airbnb and Uber with tighter rules that could shake up their business models and growth ambitions in Asia.
— Insurance Journal

Himachal signs deal with Singapore for developing smart town
The Himachal Pradesh Housing and Urban Development Authority (HIMUDA) on Monday signed a deal with the Singapore government for developing a smart integrated township on the outskirts of Shimla town to decongest the state capital.
— Business Standard

Services sector turnover rises in Q4 but economists cautious on outlook
The turnover of the services industries, excluding wholesale and retail trade as well as accommodation and food services, rose 0.5 per cent in the fourth quarter of 2016 from the corresponding period a year earlier, data from the Department of Statistics Singapore (Singstat) showed yesterday, but economists remained cautious in their outlook for the sector.
— Today Online

S’pore websites at risk of data leak caused by Cloudbleed bug
Singapore-registered Web domains could be among those exposed to the Cloudbleed bug, which causes private information keyed into supposedly secure websites to be leaked.
— Today Online

Singapore’s digital problems can’t be solved with $ alone
The Singapore Budget unveiled a raft of new measures aimed at getting Singapore’s reluctant SMEs/SMBs (small media enterprises/businesses) to go digital and use technology in their businesses. It basically amounted to throwing money at the problem. This seems to not only miss the point but not having learnt from previous times when this was tried.
— Singapore Business Review

Singapore Eases Regulatory Regime for VC Funds to Promote Financing for Start-Ups
The Monetary Authority of Singapore has proposed a simplification of the authorisation process and regulatory framework for venture capital managers—with the goal of supporting start-ups.
— JD Supra Business Advisor

Proposed changes to Singapore GST system would level playing field for local businesses
In his budget speech this week, Singapore’s finance minister Heng Swee Keat announced that Singapore is looking into adjusting its goods and service tax (GST) system to level the playing field between local businesses, which are GST registered, and foreign based businesses that are not.
— Out-Law