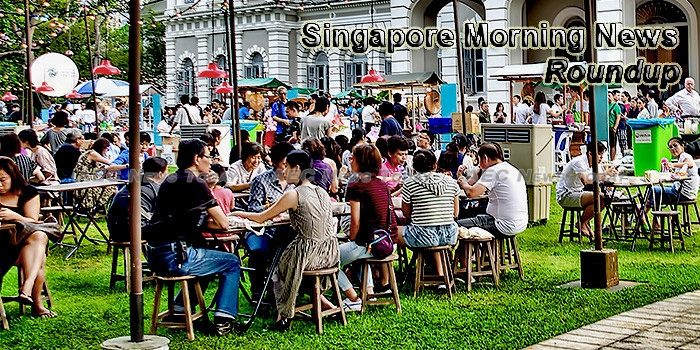 Interconnection is key to Singapore’s push towards a Smart Nation
THE 2017 Singapore National Day Rally speech, an annual policy address to Singaporeans by Prime Minister Lee Hsien Loong, took place earlier this month. In his speech, Singapore is said to have a “natural advantage” to become a Smart Nation.
— Digital News Asia

Going cashless? Why some in Singapore prefer hard cash
Despite high smartphone and mobile broadband penetration rates and a variety of options for cashless payments, some in Singapore still prefer to use hard cash. Brandon Tanoto finds out what’s behind this unwillingness to go cashless.
— Channel NewsAsia (video)

Singapore issues travel advisory over violence in Rakhine State [Channel NewsAsia]
Singaporeans currently in Rakhine State or travelling to Myanmar should e-Register with MFA and stay in touch with family and friends.
— Singapore Government

45 organisations commit to framework for improving workplace health, safety
Forty-five organisations signed a new accord yesterday to commit to a common framework to sharpen the capabilities of occupational health and safety professionals and practitioners, so they can better guide and lead the creation and sustainability of healthier and safer workplaces.
— Today Online

Singapore website apologises for ‘anguish’ caused by article on JB hospital negligence
Local socio-political news site The Independent Singapore on Sunday (Sept 3) took down an article claiming that a Singaporean had died after a Malaysian hospital demanded payment before treating him, and apologised “for the anguish and distress this incident has caused”.
— Today Online

Health and safety critical for workplaces of the future: Sam Tan
In the age of fast-paced technological change, it is hard to predict how work will evolve in the future, and how they might impact risks to safety and health. But Singapore has taken some approaches that could be useful in addressing some of the challenges, said Minister of State for Manpower Sam Tan.
— Channel NewsAsia

Malaysia to write to Singapore over allegations regarding Singaporean in JB accident: Report
Malaysia’s Health Ministry will write to Singapore to express its disappointment over allegations that there had been a delay and demand for payment before treating Justinian Tan, a Singaporean who died after an accident in Johor Baru on Aug 25, according to a report on Malaysian news portal Berita Harian.
— Channel NewsAsia

How Singapore became a hot ICO destination
As the crypto-token market heats up, Singapore has emerged as one of a few key hubs for blockchain startups wanting to launch an initial coin offering (ICO). The city-state is a long-established hub for corporate setup due to its tax friendly rules, light-touch regulation, and state funding. It is home to over 200 banks with total assets amounting to a whopping $2 trillion, and it has already played host to a long list of successful ICOs.
— Venturebeat

Retailers in city area gearing up for F1 night race
Retailers in the city are gearing up for the Formula One race in two weeks with special promotions and extended hours, and even hiring extra staff and ordering more stock to cater to crowds.
— The Straits Times (paywall)

En bloc surge has legs if pricing stays realistic
THE current activity in en bloc sale transactions has legs but a number of factors could end the party, including owners’ rising price expectations.
— The Business Times

Farewell to central structural walls in HDB flats?
Structural walls in the centre of a Housing Board (HDB) flat may soon be a thing of the past, allowing homeowners to make the most of the space.
— The New Paper

12,000 attend festival to celebrate families
It was a race filled with a number of unwilling participants. Some refused to start, others started crying midway during the race and one attempted a U-turn as he reached the finish line.
— The Straits Times (paywall)

How to spend 72 hours in Singapore
Three days is plenty of time to dig below Singapore’s shiny exterior and get well acquainted with its stellar food scene.
— Stuff