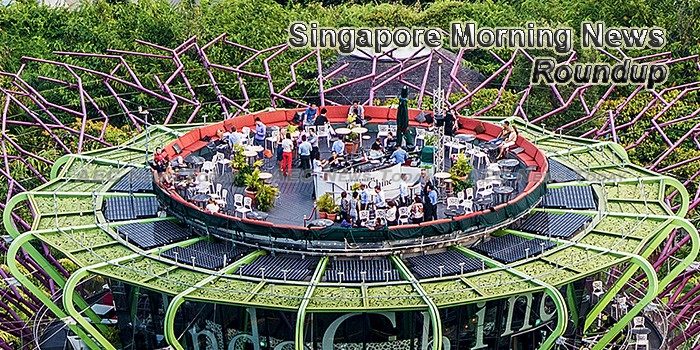 Qantas rekindles Changi romance, deepening rivalry with SIA
QANTAS Airways may be rekindling its London connection with Changi Airport after a five-year fling with Dubai, but the Australian carrier’s make-up bouquet of additional flights through Singapore could raise a rash for Singapore Airlines (SIA).
— The Business Times

CPF Investment Scheme funds up 3.4% in 2nd quarter
CPF members who invested in funds that are part of the Central Provident Fund Investment Scheme (CPFIS) reaped average returns of 3.4 per cent in the three months to June 30.
— The Straits Times (paywall)

Sharp rise in DC charges for non-landed homes amid en bloc fever
WITH collective-sale fever heating up in Singapore, the development charge (DC) rates for non-landed residential use has been raised by a sharp 13.8 per cent on average.
— The Business Times

Lukewarm response from retailers to support BYO campaign
Over the last five months, non-governmental organisation Zero Waste SG tried to draw some 200 retailers to be a part of the Bring Your Own (BYO) Singapore campaign. In the end, only 14 came on board.
— Today Online

Getting workers home safely
It’s a situation any worker will be familiar with in industries ranging from computing to construction: Meeting key objectives to keep business — and pay cheques — coming in. While unmet business objectives may hurt the bottomline, workplace safety lapses can exact a toll that can’t be described in dollars and cents: The loss of human life.
— Today Online

Singapore banks face creative destruction
WHEN is something money and not just a cowrie shell? When you can pay taxes with it. Or that’s the argument of chartalists, the folks who see the state’s hand behind the origins of all manner of money.
— The Star Online

Tourism Fiji’s Singapore Representative In Fiji
Her experience with Singapore based, Xzodus Pte Ltd specialising in destination marketing and consultation for travel, tourism and the hospitality industry is hugely beneficial for Fiji.
— Sun (Fiji) News

Singapore, PH team up for NCR’s Intelligent Transport System
Singapore is partnering with the Philippines to develop an intelligent transport system (ITS) to ease Metro Manila’s vehicular congestion based on the former’s ITS and best practices in traffic and transport management.
— Manila Bulletin

Less whoop, more whimper from July’s bank lending
BANK lending in July reflected a tepid showing in business loans, dashing some hopes of a sustained momentum into the second half, data from the Monetary Authority of Singapore (MAS) showed on Thursday.
— The Business Times

Farewell reception for a president who ‘worked tirelessly’ for Singapore
PRESIDENT Tony Tan Keng Yam was given a grand send-off on the final day of his six-year term on Thursday night, in a farewell reception and ceremony hosted by Prime Minister Lee Hsien Loong at the Istana.
— The Business Times

Thailand Morning News For May 28