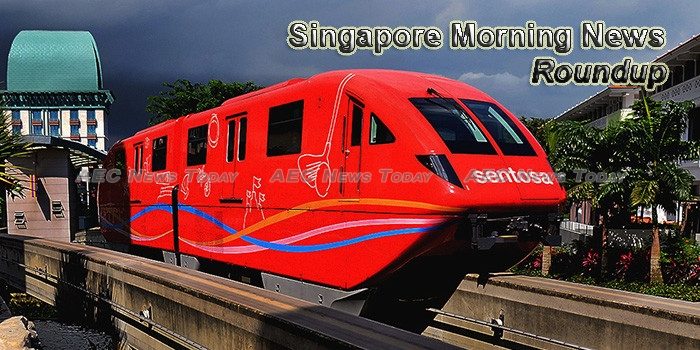 New initiative to connect Singapore and China tech firms
The Singapore Government has launched in China the first overseas initiative under the Global Innovation Alliance (GIA), a network to promote entrepreneurship and innovation with a focus on technology.
— The Nation

Mandatory ‘settling-in’ programme for new foreign workers to start in second half of 2018
New foreigners on a work permit in Singapore will soon have to undergo a mandatory settling-in programme (SIP) to learn about the country’s social norms and laws.
— Channel NewsAsia

NSF’s app improves fire bikers’ response time to emergencies
Full-time national serviceman Hashir Zahir, 20, describes himself as a problem-solver. So when he noticed that the deployment of Singapore Civil Defence Force (SCDF) fire bikers could be even faster, he decided to come up with an app to speed up their response times.
— The New Paper

Tax hike may be implemented just to maintain “extravagant public savings rates”: Ex-GIC chief economist
Former GIC chief economist Yeoh Lam Keong has postulated on Facebook that the impending tax hike here may be implemented “to maintain one of the most extravagant public savings rates in the world” while the government continues to under-spend on social and infrastructural investments.
— The Independent Singapore

Singapore getting snubbed as China rules Asia dollar bond market
It’s been a banner year for Asia’s dollar-bond market, with an unprecedented pace of sales and dozens of debut issuers. But in Singapore, one of the region’s main financial hubs, there’s a note of gloom among its fund managers.
— The Business Times

PAP: Living in a world of disconnect?
The government tried to do a Sevilla-plus on their critics this week. Earlier this week, Sevilla came back from 0-3 down against Liverpool in their Champions League match at the end of the first half to score three goals in the second to equalise 3-3. Fantastic never-say-die performance.
— The Independent Singapore

Raising the happiness index of seniors
With many countries facing the challenges posed by an ageing population, global thought leaders, leading eldercare practitioners and philanthropists gathered at the seventh Credit Suisse Philanthropists Forum to discuss trends in strategic philanthropy and the social issues resulting from the “silver tsunami”.
— The Straits Times (paywall)

Singapore’s IPO proceeds hit record highs at $3.66b
Total proceeds from Singapore’s initial public offerings (IPO) already hit $3.66b and broke through 2014’s total of $3.45b, and it’s not even the end of the year yet.
— Singapore Business Review

Bankers’ salaries could rise by up to 5%
Professionals in the banking & financial services sector can expect 3-5% increments in salary, Robert Walters Plc revealed in their salary survey.
— Singapore Business Review

Singapore River clean-up is ‘never done’: PM Lee
Forty years after Singapore embarked on a clean-up of the Singapore River, the Prime Minister said that keeping the river clean is a relentless effort and that people should help by refraining from littering.
— The New Paper

Lightning strikes can cause severe injuries in a flash
It has been 30 years since businessman Chew Lip Heng, 51, survived a lightning strike but a feeling of dread and fear whenever a thunderstorm rolls around has not gone away.
— Today Online

Josephine Teo takes over Home TeamNS
For the first time, the non-profit group that serves operationally ready national servicemen (NSmen) from the Singapore Police Force and Singapore Civil Defence Force will be led by a woman.
— The New Paper

Don’t blame the system but work to change it together: Chan Chun Sing
Upset with the pressure-cooker education system here and the obsession with academic grades? Don’t be too quick to “blame the system”, Minister in the Prime Minister’s Office Chan Chun Sing said on Friday (Nov 24).
— Today Online

Razer taking long-term bets on gaming, entertainment sector: Min-Liang Tan
Min-Liang Tan, CEO of gaming products and services corporation Razer Inc., that had an immensely successful initial public offering (IPO) earlier this month, said the company would be open to an acquisition-led strategy as it expands its business into the mobile phone space with its gamer-centred approach.
— DealStreetAsia