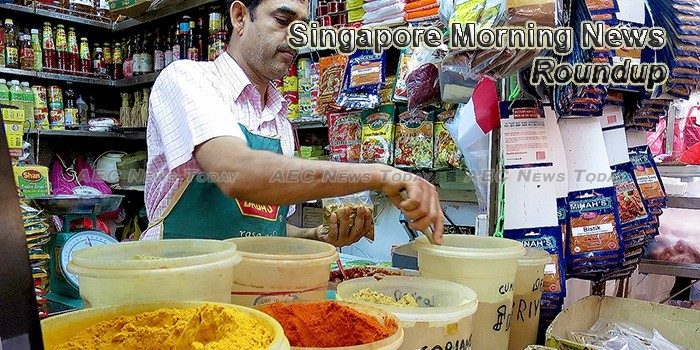 Brighter outlook for Singapore’s trade-dependent sectors, dimmer prospects at home
A TWO-SPEED economy has emerged in Singapore, going by the latest survey among private-sector economists, the results of which were released on Wednesday.
— The Business Times

Grab to beef up S’pore R&D centre, add jobs
Ride-hailing company Grab is expanding its research and development (R&D) centre in Singapore, as it opened two more centres in the region and announced plans to add over 800 developers in the next two years.
— The Straits Times

SINGAPORE-LUX. INFORMATION EXCHANGE
Luxembourg and Singapore are to begin automatically exchanging tax information in 2018, thanks to the signing of an agreement during a financial mission to Singapore last week.
— Delano

Double delight for Accenture innovation in US and Singapore
Accenture has opened innovation centres in New York and Singapore for finance and risk, and software application development cycles respectively.
— Banking Technology

(Singapore US Navy bribes scandal) Malaysian paid for US$20,000 HK dinner
Officers in a burgeoning US Navy bribery scandal called themselves the Lion King’s Harem, the Wolfpack, the Cool Kids and the Brotherhood. They scouted for others who might also accept sex, trips and other lavish perks from a Malaysian defense contractor known as “Fat Leonard” in exchange for classified information.
— The Standard

SINGAPORE’S INFRASTRUCTURE HELPS IT EARN TOP MARKS FOR EXPATS
Attention expats in Asia: Are you living in Singapore? Well, according to a recent report from Mercer, you should be. Taking into account education, infrastructure, transportation and other crucial factors, Mercer ranks Singapore as the best city in Asia for expatriates and the best worldwide for infrastructure.
— Mingtiandi

Singapore PC maker Dreamcore to show off custom gaming PCs at IT Show 2017
If you’ve been thinking that the desktop PC is dead, a Singapore startup called Dreamcore wants to change your mind with its sleek gaming machines to hit the show floor at the IT Show bazaar from tomorrow.
— Techgoondu

Economists raise Singapore’s growth forecast to 2.3%
The stronger-than-expected performance of Singapore’s economy in the fourth quarter of last year and a recovery in global trade, among other factors, have led private sector economists to significantly upgrade their full-year forecast for 2017.
— Today Online

ended Wednesday with no final declaration after Singapore was the only Asian nation to send a ministerial-level delegation.
— Bloomberg

ASEAN Regulatory Brief: Singapore Cybercrime Laws, Malaysia Property Rules for Foreigners, and Myanmar Import Surplus Regulation
The Singapore government will include four major amendments to the Computer Misuse and Cybersecurity Act in view of growing cyber threats. Once the Bill is implemented, it will criminalize trading of personal information such as credit card details, medical information, and banking information, even if no hacking was involved to gain such information.
— Asean Briefing

Singapore’s Heron 1 achieves FOC
Singapore’s defence ministry made the announcent in a statement on its web site. The announcment comes two years after the Elbit Systems Hermes 450 obtained its Singapore FOC.
— Flight Global

UBS hires from Credit Suisse for special desk in Singapore
In response to increasing demand for a seamless international banking experience for foreigners residing in Singapore, UBS Wealth Management has established a new service.
— Hubbis

Tough job market amid brighter signs for economy [The Straits Times]
There are good prospects flagged for the economy, but less so for the job market, as Singapore enters a tricky phase of growth.
— Singapore Government